When asked about Ronnie Hillman‘s trade value, two NFL GMs told Jeff Legwold of ESPN.com (on Twitter) that he doesn’t have much because he doesn’t play special teams. The Broncos running back is said to be on the bubble as the 53-man deadline approaches.

Denver has already handed Hillman $600K through a signing bonus and workout bonuses, but his $1.4MM base salary is non-guaranteed. By most accounts, Devontae Booker and Kapri Bibbs have leapfrogged the one-time Broncos starter.

Here’s more from around the NFL on this busy day:

The Browns didn’t re-sign many of their top unrestricted free agents when the 2016 league year opened last month, but the team has brought back several of its restricted and exclusive-rights free agents. The Browns announced today in a press release that they’ve re-signed RFA offensive lineman Austin Pasztor and linebacker Scott Solomon, along with ERFA kicker Travis Coons, wide receiver Darius Jennings, and offensive lineman Kaleb Johnson. 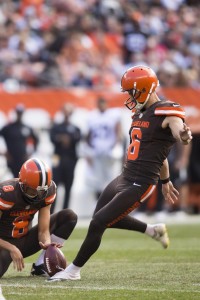 Of the re-signed players, Pasztor and Coons had the most significant roles on the 2015 Browns. Pasztor made four starts at left guard for the club, and has now made 27 starts in his NFL career. Given his experience at multiple positions along the offensive line, Pasztor may have an opportunity to win a full-time starting job in 2016, with Mitchell Schwartz and Alex Mack no longer in the mix.

Jennings saw action in four games for the Browns down the stretch, catching 14 balls for 117 yards and earning some reps as a kick returner. Solomon, meanwhile, appeared in just two games before landing on injured reserve with a knee injury, while Johnson was claimed off waivers from Baltimore in December and didn’t see any playing time down the stretch in Cleveland.

Pasztor and Solomon both received low-end RFA tenders, so they’ll be in line for salaries of $1.671MM if they make the team. The other three players are on minimum-salary deals, and weren’t really free agents, since their only two options were to sign their respective ERFA tenders or to sit out.

Another DeflateGate loose end was tied off earlier today, when the NFL announced that Patriots employees John Jastremski and Jim McNally have been reinstated from their suspensions. As Ian Rapoport of NFL.com (Twitter links) notes, the NFL said the Pats “satisfied the league’s requirements” for the staffers’ returns, but Jastremski is prohibited from handling footballs and McNally is barred from handling equipment going forward.

The Browns have officially shut down Tashaun Gipson for the season, as ESPN’s Adam Caplan tweets that the team has placed the third-year pro on the injured reserve. Cleveland has signed linebacker Scott Solomon from the practice squad to take the open roster spot.

Gipson has missed the Browns’ last three games after suffering a knee injury in late November. The 24-year-old luckily avoided an ACL injury, instead suffering a Grade 3 MCL injury. The team was initially optimistic that he’d be able to return this season, but the organization apparently decided it was better to be cautious.

Despite missing three games, Gipson still leads the NFC with six interceptions, topping last year’s career-high of five. Pro Football Focus’ advanced statistics (subscription required) weren’t favorable of Gipson during his first two years, but he ranks as the league’s sixth-best safety in 2014. Undrafted out of Wyoming in 2012, Gipson has made 37 appearances during his three years in the league.

Solomon, a seventh-round pick in 2012, has spent time with the Titans, Jets and Buccaneers. In 20 career games, he’s compiled 12 tackles and a sack.

The Browns will sign linebacker Zac Diles, according to Aaron Wilson of the National Football Post (on Twitter). Diles was cut loose by the Texans last week.

Diles, 29, was once a regular starter for the Texans but has bounced around a bit in recent years with stints in Indianapolis, Tampa Bay, Tennessee, and finally Houston again. The Texans welcomed Diles back upon multiple injuries to their stable of linebackers but they bid him farewell today as there is no longer a need at the position. Diles has seen action in a combined nine game across the last 3 seasons.

The Browns have also added defensive end Scott Solomon to their practice squad and re-signed defensive lineman Jacobbi McDaniel (link). Solomon, who recently turned 26, played in 6 games for the Bucs this season and recorded seven tackles with one sack. McDaniel, 25, was released from Cleveland’s practice squad just a week ago. To make room, D.J. Smith has been let go. Smith, 25, was just added to the taxi squad last week, so it was a rather short stay for him. The former sixth-round pick has seen NFL action for the Packers, Texans, Panthers, and Browns over the last four years.

As we look forward to a showdown of the AFC West’s leaders tonight, let’s shift our focus to the other side of the conference and round up a few items from out of the AFC East….