The Lions are trading wide receiver Jeremy Kerley to the 49ers in exchange for offensive lineman Brandon Thomas, according to Adam Schefter of ESPN.com (Twitter link). The deal is pending physicals. 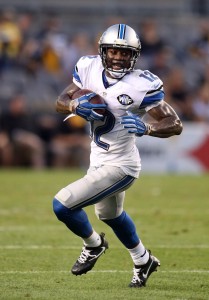 Kerley, 27, agreed to a one-year deal with Detroit this offseason after spending the first five seasons of his career with the Jets. Largely written out of New York’s offense in 2015, Kerley posted the worst statistics of his career, hauling in only 16 passes for 152 yards, and was subsequently released.Still, Kerley has enjoyed some productive seasons in the past, most notably in 2012, when he hauled in 56 passes for 827 yards and a pair of touchdowns.

The Lions will absorb $90K in dead money as a result of the trade, meaning the Niners will only be responsible for Kerley’s minimum base salary. In San Francisco, Kerley will slot into a wide receiver corps that has little veteran experience behind Torrey Smith, as Quinton Patton, Bruce Ellington, DeAndre Smelter, and Aaron Burbridge are a few of the other options available to head coach Chip Kelly. Ellington, notably, has dealt with ankle and hamstring injuries in recent weeks, so Kerley could be insurance against a lengthy Ellington absence.

Thomas, meanwhile, is a former third-round pick, but has never taken a snap in the NFL. He missed his entire rookie season in 2014 while recovering from a torn ACL suffered in college, and didn’t appear in a game during his sophomore campaign. Thomas wasn’t need in the Bay Area given that Anthony Davis has come out of retirement and shifted to guard, so he’ll head to Detroit and act as depth behind starting interior lineman Larry Warford and Laken Tomlinson, though he can also moonlight at tackle.

Thomas, 25, is signed through the 2017 season. San Francisco will take on a roughly $250K in dead money as his prorated bonus accelerates onto its cap, while the Lions will be responsible for minimum salaries over the next two years.