2:04pm: Great news for the Colts, as owner Jim Irsay tweets that Mewhort will only be sidelined for two-to-four weeks, and will not require surgery, according to initial test results.

9:58am: Colts left guard Jack Mewhort is believed to have suffered a torn ACL during Saturday night’s preseason contest against Philadelphia, according to Ian Rapoport of NFL.com (via Twitter). Stephen Holder of The Indianapolis Star tweets that Mewhort will have an MRI today to confirm. If it is, in fact, a torn ACL, Mewhort’s season would likely be over. 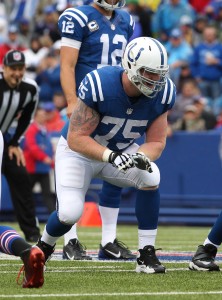 This comes as a crushing blow to an offensive line that was already a major cause of concern, especially since Mewhort was the most reliable member of that unit. The third-year pro started all 16 games for the Colts last season, grading out as the ninth-best guard in the league out of 81 eligible players, per Pro Football Focus’ advanced metrics (subscription required). Even head coach Chuck Pagano was at a loss for words Saturday, as Holder observed that Pagano “looked like he [had] seen a ghost”during last night’s press conference and admitted that he did not have a “clear picture” of his team because of the rampant injuries it has faced (Twitter links). Mewhort joins Vontae Davis, Kendall Langford, Clayton Geathers, and Henry Anderson as players who, at the very least, may not be ready for the start of the regular season. Pagano could not give a definite answer on when his injured players will return to the practice field full-time.

ESPN’s Mike Wells observes that rookie Joe Haeg would likely be in line to start at left guard if Mewhort’s season is over, but Haeg is out with an ankle injury. That means Jonotthan Harrison, who is also the backup center, could end up starting at left guard. As Wells writes, “The Colts have to ride the right arm of Andrew Luck to have any chance this season. That’ll be hard to do if the offensive line can’t protect the franchise player.”