Eagles defensive end Brandon Graham is expected to skip organized team activities later this month and might even abstain from mandatory minicamp in June unless the Eagles renegotiate his contract, two NFL sources tell Jeff McLane of The Philadelphia Inquirer. Meanwhile, Jason La Canfora of CBSSports.com (Twitter link) hears that there is no contract dispute between Graham and the team. 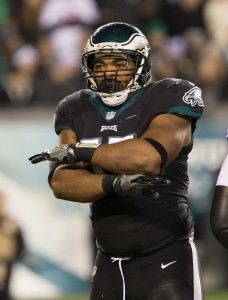 Graham, 29, is midway through a four-year, $26MM deal signed with Philly in 2015. He’s scheduled to carry cap numbers of $7.5MM in each of the next two seasons, but he apparently wants more dollars and/or more years. As it stands, the Eagles would only have to carry $1MM in dead money if they were to release him after the 2017 season, so he’s likely looking for some form of increased security.

Last year, Graham finished out with 5.5 sacks, but he had a much better season than the standard numbers would suggest. Pro Football Focus rated Graham as the No. 2 edge defender in the NFL last season with a stellar 93.3 overall score and he was edged only by Raiders star Khalil Mack. In the two years prior, PFF cast him as a top 15 or 20 edge rusher in the league, so Graham has a history of producing at a high level. Still, with two years to go on his current deal, he won’t have a ton of leverage in talks unless he stays away from the team this summer.