The Bills are apparently in the market for a tight end. According to ESPN’s Adam Caplan (via Twitter), the team worked out veteran Chase Ford today. 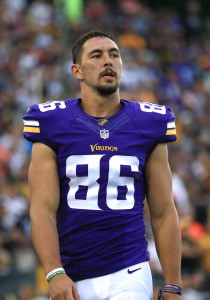 Ford, 27, hasn’t played an NFL game since 2014, but he showed plenty of promise during his tenure with the Vikings. Between 2013 and 2014, the former undrafted free agent out of Miami hauled in 34 catches for 391 yards and one touchdown in 20 games (five starts). Since that time, the 27-year-old has spent time with the Ravens and Browns (he also had a stint with the Eagles to begin his professional career).

Despite underwhelming performance from the position in recent years, the Bills did little to improve their tight end corps this offseason. Charles Clay, who signed with the organization prior to the 2015 season, has averaged 54 receptions for 540 yards and three touchdowns during his two years in Buffalo. Vic Carucci of the Buffalo News previously lamented the team’s lack of tight end production, and he attributed Clay’s $9MM cap hit to the fact that the Bills didn’t add reinforcement this summer.

If Ford is ultimately signed, he’ll still have plenty of competition to overcome for a reserve role. Besides Clay, the Bills are currently rostering tight ends Nick O’Leary, Gerald Christian, and Logan Thomas.

Though the Steelers were reported as an early suitor for free agent Josh Norman, the match never made sense, writes Jeremy Fowler of ESPN.com (and notably, new reports have indicated that Pittsburgh is not, in fact, in the running for Norman). The Steelers have less than $4MM available in cap space, and given that Norman is said to be targeting an annual salary north of $14MM, the numbers were never going to add up.

After a devastating loss on Sunday to the Jaguars, the Ravens have shaken up their roster a little, removing three players from the 53-man squad and bringing in three new additions. Here are today’s roster moves out of Baltimore, according to the team (all Twitter links):

The most notable move of the Ravens’ six transactions today is the decision to put Perriman on IR, officially ending his rookie season. Baltimore’s first-round pick never saw the field during the 2015 regular season, and after being selected 26th overall in the draft back in April, he won’t get an opportunity to make his NFL debut until 2016.

The Ravens will also be turning to a new return man for their next game, with Ross no longer in the mix, and the newly-signed Clay may get a shot at the job. Ross had fumbled twice in Baltimore’s last three games, leading to his release.

Here are Thursday’s practice squad signings and cuts from around the league: