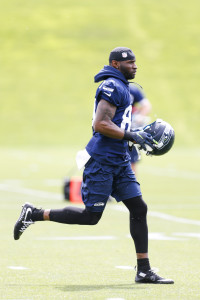 Offensive lineman Daniel Kilgore and wide receiver DeAndre Smelter will begin practicing for the 49ers this week, head coach Jim Tomsula confirmed today (Twitter link via Eric Branch of the San Francisco Chronicle). Once they begin practicing, the Niners will have a three-week window to decide whether or not to activate Kilgore from the PUP list and Smelter from the NFI list.

After surveying seven NFL coaches and personnel men, Adam Schefter and Chris Mortensen of ESPN.com say the results were unanimous, with those sources suggesting the Lions would be “foolish” to part with Matthew Stafford in 2016. Although Stafford could net a nice haul of draft picks for Detroit, the fact that there’d be no obvious replacement in free agency or the draft makes it unlikely that the Lions make a move.

Ricardo Lockette Having Surgery, Out For Year

After taking a scary hit on Sunday that knocked him out of the Seahawks’ game against the Cowboys, wide receiver Ricardo Lockette is undergoing surgery today to stabilize ligament damage in his neck, the team announced in a press release.

According to the Seahawks, Lockette has full motion and feeling in all his extremities, and his prognosis is good. However, Seattle head coach Pete Carroll confirmed today during an appearance on 710 AM in Seattle that Lockette will be out for the rest of the season (Twitter link via Bob Condotta of the Seattle Times). A roster move placing the wideout on injured reserve can be expected within the next few days.

Lockette, 29, hasn’t been a significant part of the Seahawks’ offense in recent years, totaling just 22 receptions for 451 yards and four touchdowns over parts of the last five seasons for Seattle. Still, he played a key role in the team’s run to the Super Bowl last season, catching six balls in the postseason, including three against New England in the Super Bowl.

If the Seahawks want to add a player from outside of the organization to replace Lockette on the roster, the team would have the option of making a trade, as long as it’s done by tomorrow afternoon. Per Condotta (Twitter link), Carroll said today that GM John Schneider has been “burning up the phone lines,” though it’s not clear if any of those trade discussions are related to a receiver.

It’s not yet known whether or not Lockette will be able to continue his NFL career after recovering from today’s neck surgery.

Here are Tuesday’s minor transactions from around the NFL, with the latest minor moves added to the top of the list throughout the day: