Despite Mike Remmers struggling in a Super Bowl for the second time, the Chiefs want him to be part of their reconfigured offensive line. 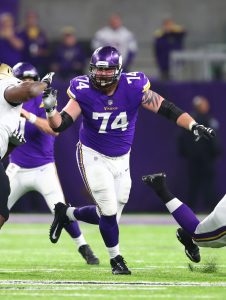 The two-time defending AFC champions are bringing Remmers back on a one-year deal worth $3.5MM, Ian Rapoport of NFL.com tweets. The nomadic blocker could earn up to $7MM on this contract.

Kansas City signed Remmers last year, and he ended up playing a pivotal role. Mitchell Schwartz‘s back injury thrust Remmers into action. He started 10 regular-season games and all three of Kansas City’s playoff tilts. After Eric Fisher‘s Achilles tear in the AFC championship game, the Chiefs turned to Remmers at left tackle in Super Bowl LV. While his matchup with Jason Pierre-Paul somewhat resembled his Super Bowl 50 encounter with Von Miller, Remmers has been an NFL starter for the past six seasons.

The Chiefs have cut both Schwartz and Fisher, leaving two gaping holes on the edges of their offensive line. While Kansas City added Joe Thuney on a monster guard deal and brought Kyle Long out of retirement, the team’s tackle needs remain noticeable. Remmers, 32 in April, would stand to either fill one of them at a low cost or reprise the swing role he was brought in to play last year. In his tweet announcing the agreement, Rapoport characterizes Remmers as a Chiefs starter. Remmers’ agent, Brett Tessler, concurs, understandably (Twitter link). It will be interesting to see if the Chiefs go in that direction given the tackle stability the organization possessed going into 2020.

Remmers worked as Carolina’s starting right tackle from 2015-17. He played with Minnesota in 2018 and the Giants in 2019, starting 30 games between those two seasons. While maligned at times, Remmers has started 88 games in his career. Both he and Andrew Wylie, a guard whom the Chiefs turned to at right tackle in the Super Bowl, are back for 2021.

Mike Remmers will have a shot to contribute to a seventh NFL team in nine seasons, and the free agent tackle will be joining the defending Super Bowl champions. 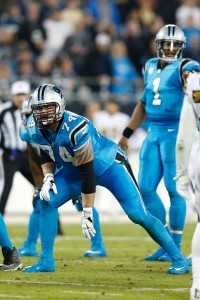 The veteran tackle signed with the Chiefs, the team announced. This will be a one-year deal, according to Remmers’ agent, Brett Tessler (Twitter link).

While the Chiefs do not have a starting job available, with Eric Fisher and Mitchell Schwartz locked up long-term, Remmers figures to compete to be Kansas City’s swing man. Although Schwartz is one of the NFL’s most durable players, Fisher missed eight games last season.

This will mark a pace change for the 30-year-old blocker. Remmers has started 78 of the 79 games he’s played in his eight-year career. He caught on with the Giants last year and was the Vikings’ right tackle starter over the previous two seasons. Prior to that, Remmers spent two-plus seasons operating as the Panthers’ starting right tackle — a tenure that included a Super Bowl start and a tough matchup against Von Miller.

Despite the Giants opting not to re-sign Remmers, he graded as Pro Football Focus’ No. 48 overall tackle last season. The Chiefs’ swing man in 2019, Cameron Erving, came in at 80th on that hierarchy in a tough stretch filling in for the injured Fisher.

Free agent offensive lineman Mike Remmers will not re-sign with the Giants before the market opens in two weeks, according to Mike Florio of Pro Football Talk. Remmers started 14 games at right tackle for New York in 2019, but given that he’s entering his age-31 season, it shouldn’t be surprising if he’s forced to settle for another one-year deal in free agency. A former undrafted free agent, Remmers has spent two of the past three seasons playing under Pat Shurmur, leading Florio to speculate that Remmer could now be an option for the offensive line-needy Broncos, who recently brought Shurmur aboard as offensive coordinator.

Jay Gruden studied this year’s quarterback class extensively, watching every throw each of the high- and mid-tier prospects made. The sixth-year Redskins coach said he did more work on this year’s QB class than he had in any draft since 2011, when the Bengals, Gruden’s employer at the time, selected Andy Dalton. In addition to Dwayne Haskins‘ arm strength, Gruden said the one-year Ohio State starter’s presence reminded him of Cam Newton.

“They’re all pretty confident kids, bright-eyed. I was impressed with the entire class,” Gruden said, via Albert Breer of SI.com. “But (Haskins) has a demeanor and aura about him, kind of similar to Cam Newton coming out, just an aura of confidence. There’s something about him. When you’re around him, you feel like he’s got it, everything’s going to be OK — that he’s going to be successful, because he believes it.”

Haskins and Case Keenum will split the Redskins’ first-team reps, with Colt McCoy still out because of his fractured fibula injury. However, McCoy is expected to participate partially in Washington’s minicamp and be ready for training camp, per Adam Schefter of ESPN.com (Twitter link). While Gruden said Haskins is no lock to play this year, nearly every recent first-round passer chosen becoming a first-season starter points to the newcomer taking the reins early.

Here is the latest from the NFC East, shifting to news out of Dallas:

The Packers have had a drama-filled offseason. Various media reports have detailed extensive dysfunction in the organization during the final days of the Mike McCarthy era, and Aaron Rodgers has feuded publicly with old teammates like Greg Jennings. Green Bay is looking to put all the drama behind them this season, and seem to be very excited about starting fresh with new coach Matt LaFleur. Those around the team are hoping that LaFleur will provide some desperately needed energy to the team, and will help push and revitalize Rodgers.

Apparently the Packers weren’t willing to cede too much control to the first-time head coach however. Tom Silverstein of the Milwaukee Journal Sentinel writes that LaFleur “wasn’t the sole decision-maker” when it came to filling out his coaching staff. “Defensive coordinator Mike Pettine was not forced on LaFleur, but the new coach was strongly encouraged to keep him,” Silverstein writes, and it sounds like other assistant coaching decisions may not have been left up to LaFleur. Team president Mark Murphy has strongly denied that LaFleur wasn’t allowed to pick his own staff.

Silverstein points out that the Packers currently have a chaotic power structure with LaFleur, GM Brian Gutekunst, and director of football operations Russ Ball all reporting directly to Murphy, and many in the organization worry that’s a dynamic that is going to lead to dysfunction. This isn’t a great start for LaFleur’s tenure, but winning a few games early on will make all of this worry go away pretty quickly.