Two-time Super Bowl starter Mike Remmers will join a team in need at his position. The journeyman tackle is signing with the Jets on a practice squad agreement, Tom Pelissero of NFL.com tweets. 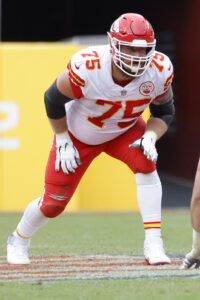 Remmers is expected to be bumped up to the Jets’ 53-man roster soon. The former Chargers, Panthers, Vikings, Giants and Chiefs blocker has not played for a team this season; the Chiefs did not re-sign him after the 2021 campaign.

The Jets have both Mekhi Becton and Duane Brown on IR. They finished their Week 3 game with Conor McDermott and rookie Max Mitchell as their tackles. George Fant, who has worked as both a left- and right-side starter with the Jets, started at left tackle against the Bengals but left early due to a lingering knee injury. Trey Hendrickson finished the game with 2.5 sacks, two of those forcing Joe Flacco fumbles.

Remmers, 33, has made 90 career starts. He is probably best known for tough nights against Von Miller (Super Bowl 50) and Shaq Barrett (Super Bowl LV), but the former UDFA brings a level of experience the Jets are lacking right now. Brown is ineligible to play until at least Week 5. Remmers, who played just four games last season before a knee injury led the Chiefs to place him on IR, has worked primarily as a right tackle but did play inside during the 2018 season in Minnesota. The Jets are more solidified at guard, however; the team’s tackle plan veered off the rails once Becton suffered an avulsion fracture during training camp. Signed to a lucrative deal to replace Becton, Brown is rehabbing a shoulder injury.

The tackle uncertainty engulfing Gang Green comes as the team is readying Zach Wilson to make his season debut. Wilson, who underwent arthroscopic knee surgery in August, was slated to play behind a Fant-Becton tackle tandem. He could begin his sophomore NFL season behind Remmers and either McDermott or Mitchell. The latter has played 100% of the Jets’ right tackle snaps this season.

One comment on “Jets To Add T Mike Remmers”