After addressing clear needs at wide receiver and cornerback in the first round, the Vikings took a tackle who slid down the board. 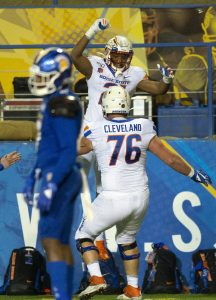 Minnesota used its second-round pick on Boise State tackle Ezra Cleveland. The former Mountain West standout was viewed as a near-lock to go in the first round, so this may well represent good value for the Vikings.

The Vikings were a rumored Cleveland suitor, but given his rumored pre-draft rise, it was perceived that said interest would have required the team using one of its two first-round picks. The 6’6″ blocker rated as Scouts Inc.’s No. 22 overall prospect.

Riley Reiff‘s status has been a discussion point this offseason, and the Vikings may have drafted his replacement. Reiff has worked as the Vikings’ left tackle since 2017. The Vikings have now used second-round picks on tackles in two of the past three years, having drafted right tackle starter Brian O’Neill in 2018. Reiff is under contract through 2021 but would not be a particularly prohibitive cut at this stage of his deal.

The Vikings have “done a lot of work on” Boise State offensive tackle Ezra Cleveland, according to Darren Wolfson of 1500 ESPN (Twitter link), but Minnesota may have to move up in Round 2 in order to land him. Per Wolfson, the Vikings may need to get ahead of the Jaguars at No. 42 if they want to grab Cleveland. Minnesota’s second-round pick doesn’t come until No. 58 overall, so general manager Rick Spielman would need to work some magic in order to move up. Luckily, the Vikings have 12 picks remaining in the draft that could be used as trade ammunition.

A few weeks ago, Boise State tackle Ezra Cleveland seemed ticketed for the second or third round. Now, it’s sounding more and more like he’ll hear his name called tonight. The Jaguars and Vikings are both showing serious interest in Cleveland, Tony Pauline of Pro Football Network hears.

The Browns have reportedly been enthralled with Cleveland, too, and not just because of his name. He has the potential to feature at four different offensive line spots (every one but center), plus enough bulk at 300+ pounds to hold his ground. Recently, NFL.com’s Mike Garafolo adds that the Boise State tackle is a “mortal lock” to be chosen in Round 1.

The Vikings have been exploring tackle options lately, even though Riley Reiff remains an option. If they drafted Cleveland, they slot the youngster at right tackle and kick Reiff inside. The Jaguars, meanwhile, will return every featured OL from last year, except for Cedric Ogbuehi, but they’re looking to bulk up the unit further.

The No. 10 pick would be too early for the Browns to take Cleveland, but they could trade down for him or fill a different need there and trade back into the first round later.