Bengals linebacker Jordan Evans has been diagnosed with a torn ACL (Twitter link via NFL.com’s Tom Pelissero). That’ll be a season-ender for the fifth-year pro, so the Bengals will place him on the injured reserve list later today. 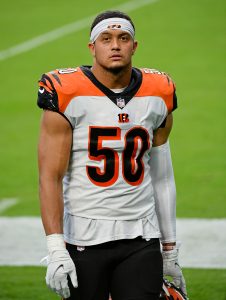 Evans went down late in the second quarter on Sunday. The Bengals went on to lose to the Packers in OT, dropping them to 3-2 on the year. His season will end with five tackles in five games.

Evans, a 2017 sixth-round pick, has appeared in 64 games with nine career starts. They’ve mostly used him on special teams since 2019; some believed that he would see more defensive snaps this year. That didn’t happen through five games, and the ACL tear means he won’t get an opportunity to crack the rotation.

All in all, Evans has 110 tackles, 3.5 sacks, seven pass defenses, and two interceptions as a pro. He could still hold interest as a special teamer in the spring — last year, Pro Football Focus assigned him a special teams grade of 77.6, good for No. 3 on the Bengals.

The Bengals have re-signed linebacker Jordan Evans to a one-year deal, per a club announcement. Financial terms of the contract were not disclosed.

Evans, a 2017 sixth-round pick, has appeared in 60 games over the last four years. In 2019 and 2020, the Bengals used him mostly on special teams. This year, he may have an opportunity to get back into the defensive rotation, especially if linebacker Josh Bynes isn’t re-signed.

Now set to enter his fifth pro season, Evans will look to build on his 105 tackles, 3.5 sacks, seven pass defenses, and two interceptions. Even if he doesn’t see an uptick in snaps, he figures to continue in his key role on special teams. Last year, Pro Football Focus assigned him a special teams grade of 77.6, good for No. 3 on the team. Meanwhile, Cethan Carter, Cincy’s top-ranked ST player, is out of the picture after joining the Dolphins.