The Jets are adding another former starter to their interior offensive line. They made a successful claim for ex-Eagles guard Nate Herbig on Thursday, Mike Kaye of ProFootballNetwork.com tweets. 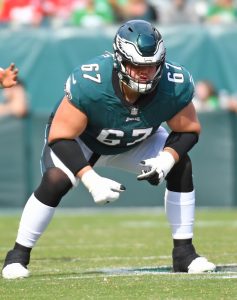 A 17-game Eagles starter over the past two years, Herbig received a Philadelphia RFA tender in March and signed it in April. The Eagles, however, cut bait after a draft that included a second-round selection of center Cam Jurgens.

Prior to the arrivals of Jurgens and 2021 second-round pick Landon Dickerson, however, Herbig worked as a 12-game starter for the Eagles in 2020. Brandon Brooks‘ full-season absence freed up a guard spot for Herbig, who originally caught on with the Eagles as a 2019 UDFA. The Eagles also turned to Herbig for five starts last season. Although he landed the Jets GM job soon after the 2019 draft, Joe Douglas was still with the Eagles when they signed Herbig.

While the Jets did not use a high draft choice on an offensive lineman, they signed Laken Tomlinson and have the likes of Greg Van Roten and Dan Feeney as swing backups. With no real path to an interior starter job available, with Alijah Vera-Tucker and Connor McGovern at the other two spots, Herbig seemingly stands to compete for a depth spot. The Stanford alum will turn 24 this summer.