New Vikings head coach Kevin O’Connell wanted a chance to build an offense around quarterback Kirk Cousins. Well, according to Tom Pelissero of NFL Network, he will get his chance as the Vikings will sign Cousins to a one-year, $35MM extension that will keep him in Minnesota through the 2023 NFL season.

The Vikings reportedly had been receiving calls on Cousins, but the new coaching staff and general manager are declaring their commitment to the veteran quarterback and gaining some much needed cap space in the process.

There are expectations for Cousins to thrive under O’Connell. With offensive weapons like running backs Dalvin Cook and Alexander Mattison, wide receivers Justin Jefferson, Adam Thielen, and K.J. Osborn, and tight end Irv Smith Jr. all returning, the familiarity of personnel should make up for the new playbook. The bookends of the offensive line seem set with Christian Darrisaw showing promise after a delayed debut and Brian O’Neill making the Pro Bowl last year. There are some questions to be answered on the interior of the line, but the pieces, for the most part, are there.

The onus will now be on the coaching staff and front office to make offseason improvements to a defense that struggled mightily last year. The Vikings defense allowed the third-most yards in the league and the ninth-most points. If the new leaders in Minnesota can turn around that unit, look for Minnesota to make a play for a playoff spot and potentially even challenge the perennial NFC North power from Green Bay for the division.

Let’s round up a few items from the league’s North divisions:

Vikings defensive end Everson Griffen sustained a concussion in a car accident this week and will not play in the team’s Week 2 game. The Vikings ruled out Griffen and linebacker Anthony Barr for Sunday’s Cardinals matchup. 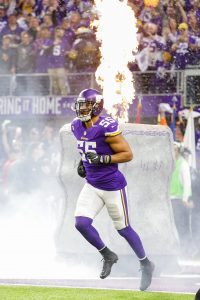 Griffen’s accident occurred when he swerved to avoid a deer and crashed into a tree, according to the Minnetrista (Minn.) Public Safety Department (via KSTP). Griffen was on his way to the team’s facility. He is now in the Vikings’ concussion protocol. The recently re-signed pass rusher missed Minnesota’s past two practices.

The Vikings re-signed Griffen this summer, doing so after he spent the 2020 season with the Cowboys and Lions. Griffen, 33, played 41% of Minnesota’s defensive snaps in Week 1. Second-year D-end D.J. Wonnum started opposite Danielle Hunter in Cincinnati. Wonnum, Stephen Weatherly and rookie third-rounder Patrick Jones reside as the non-Hunter contingent of the Vikings’ defensive end corps.

Barr did not practice this week due to a knee injury that will keep him out for a second straight game. The eighth-year outside linebacker missed 14 games last season due to a pectoral muscle tear, and he has not played thus far this season. Barr, 29, agreed to a pay cut this offseason. He is now due for free agency in 2022.

The Vikings also ruled out first-round pick Christian Darrisaw for the second straight week. Although the rookie got in three limited practices, the Vikes are exercising caution here. The team’s would-be left tackle is working his way back from core-muscle surgery, his second of the year. Rashod Hill will continue to start at left tackle for the Vikings.

Aaron Rodgers surfaced in an NFL news cycle or two this offseason, but the reigning MVP reported to Packers training camp on time. The 37-year-old quarterback did air some grievances about his situation, and he shed more light on his complicated offseason recently. As late as the weekend before camp, Rodgers evidently was quite close to retiring. A report early during his offseason quest to leave Green Bay indicated retirement was on the table. The 17th-year veteran confirmed as such.

“I mean, I felt going into the weekend before camp that I was 50/50,” Rodgers said on retirement during an appearance on the Dan LeBatard and Friends podcast (via CBS Sports). “I don’t care if people don’t believe that. That’s true. There were some things that got me to 50/50 for sure, and you know I spent a couple of days in silence and meditation and contemplation and really felt like that I should come back. There’s a lot of opportunities for growth and exciting things in Green Bay and that felt like the right thing to do.”

While Rodgers and Packers management are still not on great terms, with the sides set to huddle up after the season to determine the QB’s future, he will play a 14th season as the team’s starting QB. Here is the latest from the NFC North: 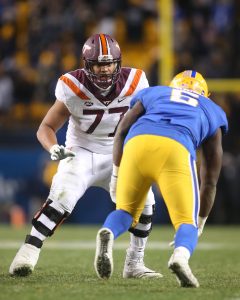 Vikings Tried To Trade Up Twice In First Round

Vikings GM Rick Spielman went into the first round of last night’s draft ready to wheel and deal. As Dan Duggan of The Athletic reports, the Vikings, who originally held the No. 14 overall pick, called the Giants about moving up to No. 11 (Twitter link). But the QB-needy Bears were willing to give New York a massive haul to trade up from No. 20 to No. 11, a swap that included a 2022 first-rounder.

Obviously, Spielman wasn’t about to part with that kind of capital to move up three spots. While we don’t know exactly who he wanted to move up for, it seems likely that the target was Northwestern LT Rashawn Slater, who went to the Chargers at No. 13, one pick before Minnesota. With Slater gone, the Vikes then engineered a trade down, acquiring the No. 23 pick and two third-round choices from the Jets to allow Gang Green to move up to No. 14 (the Vikings also sent a fourth-round selection to the Jets).

With that No. 23 pick, Spielman got a big-time LT prospect in Virginia Tech’s Christian Darrisaw, but he had to sweat it out. He worried that Darrisaw, like Slater, would be snapped up before the Vikings were back on the clock, so he thought about trading back up.

“Once we got down to about four or five picks, when we went down to 23, we did try to go back up because we wanted to try to make sure that we got Christian,” Spielman said (via Craig Peters of the team’s official website). “We were unable to [move up]. Fortunately, we did not have to. We were able to keep our extra picks that we gained and still got the player that we coveted. So, it worked out very well for us.”

Darrisaw, whose natural athleticism and talent give him a high floor, is effective both in pass- and run-blocking. Scouting reports suggest that he will have to work on finishing his blocks, but the ability and the technique is already professional-grade. He should be an immediate starter at left tackle, a job that belonged to Riley Reiff for the past four seasons.

Spielman said this morning that the “sweet spot” of this year’s draft is in the third and fourth rounds (Twitter link via Chris Tomasson of the St. Paul Pioneer Press). That’s good news for him, as the Vikings now have four third-rounders and three fourth-rounders to work with. That will give them some ammunition to continue moving around the board, and Spielman also suggested that he could even look to pick up more picks in the 2022 draft (Twitter link via Tomasson). Minnesota is already scheduled to have 11 selections next year.