Jeremiah Owusu-Koramoah‘s season has effectively come to an end. The Browns announced that they have placed the linebacker on injured reserve. 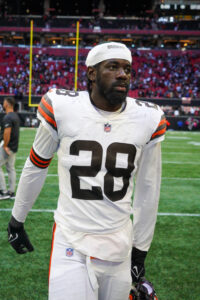 Owusu-Koramoah suffered a foot injury during Cleveland’s loss to Cincinnati on Sunday. With only four games remaining and JOK eyeing at least a four-game absence, his 2022 campaign has come to end.

The former second-round pick started 10 of his 11 appearances this season, collecting 70 tackles and a pair of forced fumbles. This came after a rookie campaign that saw him compile 76 tackles, 1.5 sacks, and two forced fumbles en route to PFWA All-Rookie Team honors. Pro Football Focus ranked Owusu-Koramoah 39th among 82 qualifying linebackers this season, but he ranked top-10 at the position in 2021.

As Anthony Poisal of the team’s website points out, Owusu-Koramoah is the Browns fourth linebacker to land on injured reserve after Anthony Walker Jr. (quad), Jacob Phillips (pectoral), and Sione Takitaki (knee). That leaves Tony Fields II, Jordan Kunaszyk, and Reggie Ragland as the team’s lone LBs on the active roster, meaning at least one of practice squad linebackers Jermaine Carter, Tae Davis, Sam Kamara, and/or Storey Jackson will likely earn a promotion.

The Browns are pretty banged up. Running back Kareem Hunt‘s calf injury is “pretty significant,” according to head coach Kevin Stefanski (Twitter link via NFL.com’s Ian Rapoport). Meanwhile, linebacker Jeremiah Owusu-Koramoah is also dealing with a calf strain. Both injuries generally require 4-6 weeks of recovery, leaving Cleveland short-handed on both sides of the ball.

Both players are likely to be placed on injured reserve, allowing the Browns to restock their roster. Per league rules, they can return in as little as three weeks, but it sounds like they’ll be shelved until late November or early December.

The Browns were already hurting in the backfield, thanks to Nick Chubb‘s calf injury. They’re down to just two RBs now — D’Ernest Johnson and sixth-round rookie Demetric Felton.

Hunt saw a much larger role in 2020, his second Browns season. He totaled 1,145 yards from scrimmage and eleven scores, plus three touchdowns in two playoff games. Hunt remains under contract through the 2022 season while Chubb is signed through 2024 thanks to his three-year, $36.6MM extension.

Through six games, Chubb has 361 rushing yards off of 69 carries, good for an average of 5.2 yards per tote. He’s also registered 20 grabs for 161 yards — roughly half of last year’s receiving totals.

The Browns stopped Jeremiah Owusu-Koramoah‘s draft-weekend slide, selecting him in the second round. More than a month later, the linebacker prospect signed his four-year rookie deal. 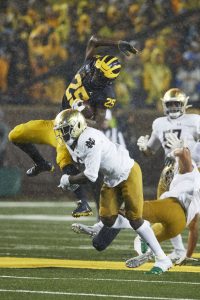 A reported heart issue is believed to have contributed to Osuwu-Koramoah’s fall to No. 52, but concerns appear to have been overblown. The former Notre Dame standout has been medically cleared and will be expected to play a major role on a retooled Cleveland defense to start his career.

Last season’s Butkus Award winner, Osusu-Koramoah entered the draft as Scouts Inc.’s No. 12 overall prospect. He came in ahead of No. 12 overall pick Micah Parsons here, but it took a second-round trade from the Browns — when they moved up seven spots — before the 221-pound defender heard his name called in Cleveland.

In addition to racking up 142 tackles between his junior and senior seasons, Owusu-Koramoah was a frequent presence in Fighting Irish opponents’ backfields. He totaled 24.5 tackles for loss in his final two seasons in South Bend. With Owusu-Koramoah signed, only two 2021 Browns draftees — first-rounder Greg Newsome and third-rounder Anthony Schwartz — have yet to ink their rookie contracts.

The Browns had previously invested significantly at the off-ball linebacker spots, giving Jamie Collins and Christian Kirksey top-market money while current GM Andrew Berry was on staff. Neither deal worked out, and the team passed on a big-ticket Joe Schobert extension. Cleveland has rebooted at linebacker and continued to retool this offseason, signing former Colts starter Anthony Walker before drafting Owusu-Koramoah. Those two may well become the team’s three-down ‘backers this season.

Jeremiah Owusu-Koramoah Fell To Second Round Due To Heart Issue?

One of the bigger surprises of last week’s draft was that Notre Dame linebacker Jeremiah Owusu-Koramoah fell to the second round. Owusu-Koramoah, the ACC’s Defensive Player of the Year, a unanimous All-American, and winner of the Butkus Award for the nation’s top linebacker, was widely considered a first-round talent, but he had to wait until the Browns traded up to the No. 52 overall selection to hear his name called.

And now we have some clarity on that front. According to Adam Schefter of ESPN.com, Owusu-Koramoah had a heart issue that came to light late in the predraft process, which was a concern for most teams (Twitter link). Though the 6-1, 221-lb ‘backer was medically cleared, the issue contributed to his draft-day slide.

But a league source tells Mary Kay Cabot of Cleveland.com that there is nothing wrong with Owusu-Koramoah’s heart, and a source close to the player himself said he has never heard of any heart issue. During an interview on The Jim Rome Show today, Owusu-Koramoah said, “I never really had any heart issues or anything going on there. You know, you hear a lot of things, but you’ve got to get it from the source.”

One would think that there would be a little smoke to this fire, since plenty of teams passed on a player of Owusu-Koramoah’s upside, but color Cleveland GM Andrew Berry unconcerned. “[T]here’s no issue that would prevent him from being productive short- or long-term,” Berry said.

Indeed, Berry even considered taking Owusu-Koramoah with the No. 26 overall pick. Berry has worked hard to upgrade the Browns’ defense this offseason, and Owusu-Koramoah is a big part of that. The Golden Domer is something of a classic ‘tweener, but that’s becoming less relevant in today’s NFL. His speed and instincts should serve him well in a traditional LB role, and he could also get some looks at safety. He lined up at safety and even as a slot corner in college.

Notre Dame linebacker Jeremiah Owusu-Koramoah had one of the most surprising tumbles of the draft. Widely expected to be a first-rounder, he ended up falling to the Browns with the 52nd overall pick after Cleveland traded up to get him. Apparently, the Browns almost pulled the trigger a round earlier. Cleveland mulled taking him with their first-rounder, the 26th overall pick. “He was definitely under consideration,” exec Paul DePodesta said, via Nate Ulrich of the Akron Beacon-Journal.

“We certainly didn’t expect him to be there when he was, but we’re fortunate that he was,” GM Andrew Berry added. “There was a lot of pacing going on upstairs once we got to about pick 42, 43, 44, just trying to figure out if there was a way we could make it happen,” DePodesta explained of the trade up. The Browns needed linebacker help, so it was the perfect situation. Not only was Owusu-Koramoah the ACC Defensive Player of the Year last season, he was also a unanimous All-American.

Here’s more fallout from this weekend’s draft in the AFC: