With teams preparing their cap sheets for the start of the NFL season, we’ve seen a number of front offices rework some contracts. We’ve compiled some of the recent contract maneuverings (as well as some details on recent signings and extension) below: 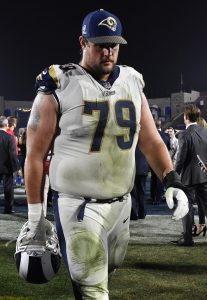 Havenstein was set to play out the final season of his contract in 2022. Despite inking his four-year, $32.5MM deal back in 2018, the veteran lineman still ranked among the 10 highest-paid right tackles in the NFL last year. According to Fowler, his new extension should “bolster his spot” in the top-10, with CBS Sports’ Jonathan Jones tweeting that Havenstein received a three-year deal.

The 2015 second-round pick has spent his entire career with the Rams, starting all 99 of his regular-season appearances. After bouncing around the offensive line early in his career, Havenstein has settled in as the team’s full-time RT since 2017.

Other than a 2019 campaign where he was limited to only nine games thanks to a knee injury, the offensive lineman has appeared in at least 13 games in each of his NFL seasons. The 30-year-old has also been along for all of the team’s recent playoff runs, starting each of his 10 postseason appearances, including all four during last year’s Super Bowl run.

Havenstein was named a first-time captain this year following another standout campaign in 2021. Last year, he ranked as the league’s ninth-best tackle among 83 qualifying players, making it the third time in four seasons that he’s ranked within the site’s top-15.

The Rams have opened some much-needed cap space. ESPN’s Field Yates reports (via Twitter) that offensive lineman Rob Havenstein has agreed to restructure his contract.

Specifically, the Rams converted $3.84MM of Havenstein’s salary into a bonus. The team also added three void years to the deal. Overall, the move saved the organization $3.072MM against the cap. Per NFL Network’s Ian Rapoport (on Twitter), the team previously had about $150K in cap space, so this will provide the front office with some necessary breathing room.

Rapoport also adds that the Rams have used in-season restructurings to move about $48.222MM to future seasons. Teams generally shuffle around cap space as they look to make promotions and midseason signings, but Los Angeles has taken it to another level as they look to contend for a championship.

Havenstein was a 2015 second-round pick by the Rams, and he’s spent his entire career with the organization. The veteran has started all 90 of his regular season appearances, and he’s appeared in 100 percent of his team’s offensive snaps through the first six weeks of the season. The 29-year-old inked a four-year, $32MM extension with the Rams in 2018.

Jared Goff isn’t the only Ram whose contract is getting restructured today. Los Angeles has also restructured offensive tackle Rob Havenstein‘s deal, according to Field Yates of ESPN.com (Twitter link).

The Rams converted $2.34MM of Havenstein’s 2020 base salary into a signing bonus, per Yates. That move will create $1.56MM in cap space for Los Angeles, giving the club even more room to fit in the newly-announced signings of Leonard Floyd and A’Shawn Robinson.

Havenstein signed a four-year $32.5MM extension with the the Rams in 2018. He’s regressed a bit since then, but he’s still locked in as LA’s starting right tackle. He’s under contract through the 2022 campaign.

The Rams and Aaron Donald would like to get an extension done before the start of the season, but that’s there’s no deadline in negotiations, according to head coach Sean McVay.

“I don’t think so,” McVay said when asked whether there’s a deadline (via Mike Florio of PFT), “but I think for us ideally you’d like to be able to see a guy get in here a couple weeks before the season starts but in terms of a stern deadline we don’t have that. We’ve been in this situation before. Everybody knows how important Aaron is to us and how much we want to be able to get this thing done. In the meantime we’re appreciative of the guys that are here that are working but to say that there’s a stern deadline I wouldn’t say that but I think there is an ideal time where you’d like to get him in here to get him in football shape and feel confident that he’ll be ready to go and be healthy enough to participate just based on the things we’ve gotten exposed to before that first game.”

There has been talk of a deal coming together soon, but McVay has cautioned that nothing is imminent.

The Rams and right tackle Rob Havenstein have agreed to a contract extension, a source tells Lindsey Thiry of ESPN.com (on Twitter). It’s a four-year deal worth $32.5MM. 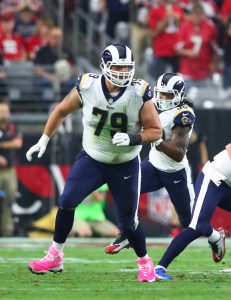 With an average annual value of just over $8MM per year, Havenstein now becomes one of the highest paid right tackles in the league in terms of new money. Currently, Redskins right tackle Morgan Moses ranks third in the NFL with his $8MM/year deal.

Havenstein, a second-round pick in the 2015 draft, has been the Rams’ starter at right tackle for the last three years. Although he is not a world-beater, he has been a consistent force on the offensive line. Last year, he graded out as Pro Football Focus’ No. 33 ranked tackle in the NFL.

In Week 1, the Rams project to start Havenstein on the right side, opposite of standout Andrew Whitworth. In between, they’ll start Rodger Saffold, John Sullivan, and Austin Blythe at the interior spots. Third-round pick Joseph Noteboom and Cornelius Lucas figure to serve as the main backups for Whitworth and Havenstein.

With Havenstein’s situation squared away, the Rams may look to address the expiring contracts of Jamon Brown and Saffold. They are also working feverishly to take care of Aaron Donald, whose expiring contract is at the forefront of everyone’s mind.

Jabrill Peppers played both linebacker and cornerback at Michigan, but nearly all NFL teams view the draft-bound prospect as a safety, he told the Associated Press. Peppers is on board, saying, “I didn’t play safety, but I’m going to be a safety.” While one club informed Peppers it would use him at linebacker, another had an outside-the-box idea. “One team told me they thought I should play offense,” revealed Peppers, who did see time on that side of the ball at Michigan last season. Peppers rushed 27 times for 167 yards, caught two passes and scored three touchdowns. He also fared well in space as a punt returner, posting a Big Ten-leading 14.8-yard average on runbacks.

As expected, the Rams have signed their entire 2015 draft class in one fell swoop, according to Jim Thomas of the St. Louis Post-Dispatch, who tweets that first-round running back Todd Gurley and seven other draftees have inked their rookie contracts with the club.

The only Rams draft pick who had previously signed his deal was sixth-round wideout Bud Sasser, who wasn’t physically cleared to play for the team due to a heart condition. St. Louis signed him to his rookie contract, ensuring he’d get his signing bonus, then waived him. Here’s the full list of the remaining Rams draftees who are now under contract with the club:

Gurley’s four-year deal will, of course, be the most lucrative of the bunch, with a signing bonus worth about $8.313MM and an overall value of $13.823MM, per Over The Cap. The contract for the 10th overall pick will also be the only one that features a fifth-year option, allowing the Rams to lock up the running back for the 2019 season.

While most teams announce their signings in bunches in the weeks following the draft, the Rams make a habit of waiting until mid-June to confirm their rookie deals. Head coach Jeff Fisher has said in previous years that he likes to make sure his newcomers are educated on financial planning before they sign their first NFL contracts.