The Rams remain one of the most active teams in the league with their activations from the injured lists, continuing that trend today with two activations from injured reserve and one from the physically unable to perform list. After the three activations, the team will have two remaining, the second lowest in the league after only their division rivals in San Francisco. In order to free up some space on the roster, Los Angeles waived veteran running back Malcolm Brown.

The biggest return for the Rams is interior offensive lineman Coleman Shelton, who started four games for the Rams before being placed on IR. Coleman initially started at right guard for Los Angeles before moving to center to help replace an injured Brian Allen. Alaric Jackson was filling in for Coleman until being asked to cover the left tackle spot left vacant when Joseph Noteboom was placed on IR. Since then, some spot starts from Oday Aboushi and Chandler Brewer have contributed to an extremely injured offensive line.

The other two activations were rookie running back Kyren Williams from IR and rookie safety Quentin Lake from the PUP list. Williams was a fifth-round draft pick out of Notre Dame and is expected to have enough of an impact as a rookie that the team felt comfortable letting go of Brown. The shorter, stocky back should provide a complimentary skillset alongside Darrell Henderson and Cam Akers. Lake, a sixth-round pick out of nearby UCLA, should provide some key depth behind Nick Scott and Taylor Rapp at safety with Jordan Fuller still on IR.

Brown’s return to Los Angeles, after a one-year stay in Miami, was fairly short-lived and unproductive. In five games this year, Brown has only touched the ball 16 times for 57 total scrimmage yards, despite all the drama keeping Akers off the field. It appears that, after seven of eight years with the team, the Rams have seen enough of what Brown can provide in their running backs room and will allow the 29-year-old to test the waiver wire.

Lastly, in anticipation of their matchup with the Cardinals this weekend, the team has elevated tight end Jared Pinkney from the practice squad. The former Vanderbilt tight end made his Rams debut last week, playing solely on special teams.

JULY 24: After originally announcing some PUP moves on their website Friday night, the Rams have made a couple of adjustments to the list before it becomes final on Tuesday.

Head coach Sean McVay informed reporters that the team “decided to pivot and not place (cornerback) Jalen Ramsey on the PUP list,” according to ESPN’s Sarah Barshop. McVay conveyed that the team doctors had been able to clear Ramsey to participate in “above the neck” drills in camp. Ramsey would not have been allowed to work in such drills if he were placed on PUP.

Linebacker Travin Howard is also not going to be placed on the PUP list, but, unfortunately, will still be placed on the team’s non-football injury list, according to Josh Alper of NBC Sports. The change in placement is due to the disclosure of information that Howard’s injury occurred in workouts leading up to camp. Howard will see a core muscle specialist in Philadelphia this week for surgery with hopes of being ready by the start of the regular season.

Lastly, the Rams added one more player to the PUP list in addition to Lake and Williams (who were originally reported below). Wide receiver Warren Jackson will join the two as physically unable to perform, according to Aaron Wilson of Pro Football Network.

JULY 23: The Rams have placed four players on the physically unable to perform list. According to the team’s website, defensive back Jalen Ramsey, linebacker Travin Howard, safety Quentin Lake, and running back Kyren Williams were all placed on PUP. 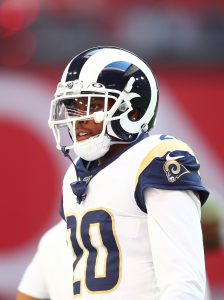 Ramsey played all of last season with tears in both shoulders, leading to an offseason operation. It’s only been a month since the defensive back decided to go under the knife, so he was always expected to be limited for the early parts of training camp. As head coach Sean McVay told reporters, the team is mostly focused on having Ramsey on the field for the start of the regular season.

“The thing with Jalen is, you want to see what the timetable is, because there are some parameters where you lose the ability to do certain things you might want to, but that’s definitely going to be a topic [Vice President, Sports Medicine and Performance Reggie Scott and I] will discuss this afternoon,” McVay said (via the team’s website). “But he’s doing good. He’s been attacking the rehab the right way. He’s feeling good. When we did do that surgery on him, obviously most importantly was how he felt about it, but then with the goal in mind of, alright, attack the rehab the right way, and most importantly, be ready for Sept. 8, ready to go. So we’ll be smart about that progress for him.”

Ramsey had another incredible season in 2021, culminating in him earning a Super Bowl ring. He finished the regular season with 77 tackles, 16 passes defended, and four interceptions in 16 games, with Pro Football Focus grading him as the top CB in the NFL. The performance also earned him his fifth Pro Bowl nod and third first-team All-Pro recognition. Ramsey started each of the Rams four playoff contests, collecting another 13 tackles.

Howard, who has mostly played a special teams role since joining the Rams, pulled his groin was training on his own. Williams, a rookie fifth-round pick, is still recovering from a broken foot suffered during offseason programs, but he’s expected to return to the field before the end of training camp. It’s uncertain what injury Lake is dealing with. The UCLA product was a sixth-round pick in this year’s draft.

Likely overshadowed by the massive news of star defensive tackle Aaron Donald‘s raise and guaranteed return in 2022, the Rams were able to sign all eight of their selections from the 2022 NFL Draft today.

The only rookie with any expectations of starting, Logan Bruss out of Wisconsin, was their first pick in the draft, despite not hearing his name called until the third round. After the retirement of tackle Andrew Whitworth and guard Austin Corbett‘s departure to the Panthers is free agency, Los Angeles needed to address its offensive line. Veteran tackle Joseph Noteboom is expected to slide in a left tackle for Whitworth, but Bruss will compete with Bobby Evans and Tremayne Anchrum for the the right guard starting job left vacant by Corbett. The Rams ended their draft addressing the offensive line, as well, selecting Michigan State tackle AJ Arcuri with one of their three seventh-round picks.

Los Angeles made several additions to its secondary, as well, through the draft. Cornerbacks Darious Williams and Donte Deayon hit the free agent market, but the Rams were able to bring back Troy Hill via trade after a one-year vacation in Cleveland this offseason. They may not be expected to start right away, but South Carolina State’s Decobie Durant and Georgia’s Derion Kendrick will add some depth to help make up for the free agency losses. With Nick Scott, Jordan Fuller, Taylor Rapp, and Terrell Burgess all returning at safety, UCLA’s Quentin Lake and Kansas State’s Russ Yeast will try to unseat them and each other in order to earn a roster spot at the end of camps.

The Rams lost Sony Michel to the Dolphins this offseason but bring back running backs Cam Akers, who returned from a preseason tear of his Achilles tendon in the last week of the regular season last year, and Darrell Henderson. Los Angeles selected Notre Dame running back Kyren Williams in the fifth round not only for his prowess as a runner but because he showed a talent in college for receiving the ball, as well, a skill that has been missing from the Rams’ backfield since the days of prime Todd Gurley.

Lastly, if Daniel Hardy, an outside linebacker from Montana State, can nab a roster spot, he’ll serve as a depth piece in a stacked linebacker room that houses Bobby Wagner, Leonard Floyd, Ernest Jones, Justin Hollins, Terrell Lewis, and others.

Here are the draft picks the Rams will take into camps with them this summer: