The Seahawks’ anchor at wide receiver this decade, Doug Baldwin may be unable to continue his career. The Pro Bowl wideout’s injuries could force an early retirement.

The overall effect of the injuries Baldwin has sustained may well force him to end his career after eight seasons, Adam Schefter of ESPN.com reports (on Twitter). 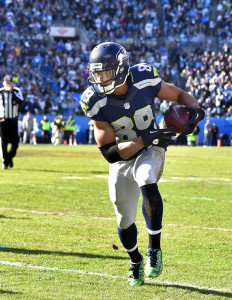 Baldwin dealt with a knee injury throughout last season. It frequently limited the usually dominant slot target. In the offseason alone, Baldwin has undergone knee, groin and shoulder operations. These may have taken their toll to the point Baldwin will have to shut it down, though Schefter adds the popular Seahawk wants to keep playing.

Baldwin’s injury concerns did not blindside the Seahawks, per Schefter. Their trade-up decision to select D.K. Metcalf certainly points to the team possibly knowing it needs immediate help at receiver. While nothing has come out from Baldwin just yet, it’s obviously in play the 30-year-old NFL success story will not return for the 2019 season.

Russell Wilson‘s ascent into one of the NFL’s best quarterbacks involved plenty of Baldwin help. The former undrafted receiver made the Pro Bowl in 2016 and ’17; those seasons came after Baldwin’s 14-touchdown 2015. He played all 16 games in each of those seasons. Saddled with maladies last year, Baldwin still managed to suit up for 13 games and help Seattle back to the playoffs.

This would mark another substantial exit of a Super Bowls-era Seahawk. There are not many left, with Baldwin being the last skill-position link to those rosters. Tyler Lockett joined the team as a 2015 draft choice. More will certainly be expected of him, whether Baldwin returns or not, this coming season.

Fortunately for Seattle, the club should have some resolution on this issue soon. Per Brady Henderson of ESPN.com, the Seahawks expect to know whether Baldwin will be playing or retiring in a matter of weeks, not months.

4 comments on “Injuries May Force Doug Baldwin To Retire?”