Nathaniel Hackett filled two major roles on his coaching staff today, adding Justin Outten as his offensive coordinator and Ejiro Evero as his defensive coordinator. Naturally, the team isn’t finished adding to the staff. The Broncos announced that they’ve hired Butch Barry as their offensive line coach and Klint Kubiak as their passing game coordinator/quarterbacks coach.

Barry served as the 49ers’ assistant offensive line coach this past season. He previously worked with Hackett in Green Bay, with Barry serving as a senior analyst in 2020. The coach has also had stints with the Buccaneers and University of Miami.

Kubiak was the Vikings offensive coordinator in 2020. The song of Gary Kubiak, Klint Kubiak previously worked with the Broncos when he served as offensive assistant and quarterbacks coach between 2016 and 2018.

Munchak, Denver’s O-line coach for the past three seasons, is unlikely to return under Hackett, Mike Klis of 9News notes. Although Klis adds one year remains on Munchak’s contract, the zone-blocking scheme Hackett plans to reinstall in Denver does not mesh with the concepts Broncos linemen utilized under Munchak.

Widely regarded as one of the NFL’s top O-line coaches, Munchak has received offers from other teams since the Broncos fired Vic Fangio, Klis adds. Munchak, 61, interviewed for Denver’s HC job in 2019 and ended up joining Fangio’s staff. Although the prospect of Munchak staying on in a different role under Hackett is in play, given his contract status, it appears likely another team will employ him next season. Prior to coming to Denver, Munchak spent five seasons as Pittsburgh’s O-line coach. The Hall of Fame offensive lineman was the Titans’ head coach from 2011-13. 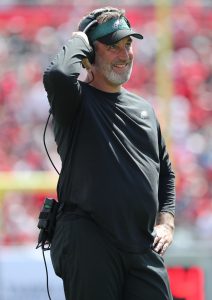