The Broncos are not stopping at Nathaniel Hackett. Two of the one-and-done coach’s assistant hires — special teams coordinator Dwayne Stukes and offensive line coach Butch Barry — are also out, Mike Klis of 9News reports (on Twitter).

Brought over after a year as the Rams’ assistant special teams coach, Stukes was in his second year on the coordinator level. His first, however, came back in 2011 — a one-year stint as the Buccaneers’ ST coordinator. Hackett opted not to bring back respected O-line coach Mike Munchak this offseason, hiring Barry instead. 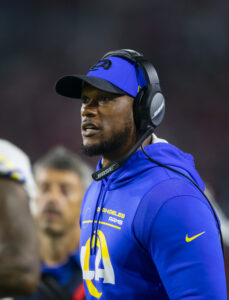 Despite going into his first season as a head coach, Hackett surrounded himself with inexperienced coordinator options. Hackett hired two ex-Rams staffers — Stukes, DC Ejiro Evero — and brought in former Packers tight ends coach Justin Outten to be his top lieutenant on offense. As of Monday night, Outten remains with the team.

Stukes, 45, has been an NFL assistant since 2006. He rose to the ST coordinator tier for one season, but after the Bucs fired Raheem Morris following the 2011 season, he became an assistant ST coach for a few franchises. Stukes moved to the Bears, Giants and Rams in this role. Collecting a Super Bowl ring for being the special teams lieutenant in Los Angeles, Stukes was on Sean McVay‘s staff for one year. The team ranks seventh in punt-return yards, though primary return man Montrell Washington has fumbled five times, but last in kick-return yards. The Broncos ranked eighth in opposing kick-return yards but 30th in punt-return yards allowed.

Although Munchak wanted to stay in Denver for a fourth season, Hackett sought Barry for schematic reasons. Shifting back to a zone-blocking scheme, the Broncos hired Barry, who worked with Hackett with the 2020 Packers. Barry, who had been the Bucs’ assistant O-line coach from 2015-18, was in an analyst role during his one season in Green Bay. Munchak, who has family in the Denver area and left the Steelers to join Vic Fangio‘s staff in 2019, did not coach this season.

The team announced Mike Mallory will coach its special teams to close out the season, while Ben Steele will lead the offensive line. Mallory spent the past eight years with the Jaguars — as ST coordinator and assistant ST coach — and Steele was the Vikings’ assistant O-line coach last season. Both were Hackett hires this offseason.

The Broncos have dealt with injuries across their O-line. Garett Bolles was lost for the season in October, and the team’s preferred right tackle options — Billy Turner and Tom Compton — missed much of the season as well. Compton missed almost all of it, returning from an offseason back procedure but only playing in one game. Both Compton and center Lloyd Cushenberry are both out for the season, heading to IR. The team used its last injury activation last week. While Pro Football Focus has viewed second-year guard Quinn Meinerz as an ascending player, slotting him in the top five among guards, it ranks the Broncos’ O-line 16th. Denver ranks 23rd in rushing and has allowed by far the most sacks (57) in the league this season.