The Lions have signed wide receiver Keshawn Martin to an undisclosed contract, the team announced today.

Martin only appeared in one game last season after signing with the 49ers, and while he didn’t post any receiving statistics, he did return two kickoffs. After getting cut in November, Martin worked out for the Bears and Broncos, but never landed another contract. Now, he’ll head to Detroit where general manager Bob Quinn should be familiar with Martin given the pair’s time with the Patriots.

Martin, 26, was traded from the Texans to New England in September 2015, and he ended up appearing in nine games (eight starts) for the Patriots, compiling 24 catches for 269 yards and two touchdowns. The former Michigan State Spartan agreed to an extension with the Patriots in January 2016 that included $600K guaranteed, but New England cut bait relatively soon. Over his five-year career, Martin has 62 receptions for 685 yards and five touchdowns. 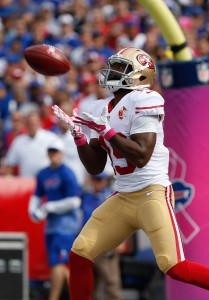 The 49ers are signing wide receiver/kick returner Keshawn Martin, as freelance NFL reporter Rand Getlin tweets. Interestingly, it will be a two-year contract for Martin.

Last year, Martin averaged 11.2 yards per reception with New England, though that came on a limited sample size of 24 receptions. Prior to the 2015 season, Martin spent his first three seasons with the Texans and saw the field in every regular season contest from 2012-2014. For his career, Martin has averaged 25.2 yards per kick return and it will be interesting to see how Martin is split between offense and special teams in SF.

As of this writing, the 49ers also have Torrey Smith, Quinton Patton, Jeremy Kerley, Rod Streater, and Aaron Burbridge on the WR depth chart.

Free agent wide receiver Keshawn Martin met with the 49ers today, according to Field Yates of ESPN.com (Twitter link). Martin was released by the Patriots during final cutdowns last weekend.

Martin, 25, was traded from the Texans to New England in September, and he ended up appearing in nine games (eight starts) for the Patriots, compiling 24 catches for 269 yards and two touchdowns. Over his four-year career, Martin has 62 receptions for 685 yards and five touchdowns. The former Michigan State Spartan agreed to an extension with the Patriots in January that included $600K guaranteed, so it was a tad surprising to see the club cut bait so soon.

San Francisco’s depth chart is extremely thin behind No. 1 wide receiver Torrey Smith, as Quinton Patton, Aaron Burbridge, and the recently-acquired Rod Streater are candidates to fill the second WR role. Jeremy Kerley, another recent trade acquisition, is expected to start in the slot, but Martin would offer another option to absorb snaps on the outside.

8:25am: The Patriots have signed wideout Keshawn Martin to a two-year, $3MM extension, reports ESPN’s Field Yates (via Twitter). The impending free agent will stay in New England through at least 2017. Ben Volin of The Boston Globe tweets that Martin will receive $850K next season and $1MM in 2017.

ESPN’s Mike Reiss writes that the receiver will also get a $600K signing bonus, and he notes several other details of the extension. There are $25K workout bonuses for 2016 and 2017, and there are also $200K per-game roster bonuses. Martin will receive $100K roster bonus on the fifth days of the 2017 league year, $750K in reception incentives, and a $200K escalator that could boost his 2017 salary.

The 25-year-old was traded from the Texans to New England in September, and he ended up appearing in nine games (eight starts) for the Patriots, compiling 24 catches for 269 yards and two touchdowns. Over his four-year career, Martin has 62 receptions for 685 yards and five touchdowns.

As Reiss notes, Julian Edelman, Brandon LaFell and Danny Amendola are all under contract for next season. However, LaFell’s sluggish 2015 season may put him on the chopping block, while Amendola’s $5MM salary could make him a cap casualty.