END_OF_DOCUMENT_TOKEN_TO_BE_REPLACED

SUNDAY: Seattle has announced the transaction.

SATURDAY: The Seahawks appear to have re-signed Will Tukuafu, as the veteran fullback posted an Instagram picture of himself signing a contract while at the Seahawks’ facility, tweets Bob Condotta of the Seattle Times. Tukuafu worked out for Seattle roughly a week ago, according to Condotta (Twitter link). 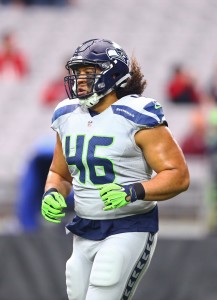 [RELATED: Q&A with Bob Condotta of the Seattle Times]

Tukuafu, 32, spent the past two seasons with the Seahawks after playing for the divisional rival 49ers from 2011-13. He played on approximately 20% of Seattle’s offensive plays last year, blocking for breakout rookie Thomas Rawls and toting the ball four times himself, accruing a grand total of one yard (but also one touchdown!). Tukuafu can also help out a bit on special teams, as he averaged ~14% playtime on the Seahawks’ ST snaps over the past two seasons.

Clearly, given that he’s being signed this late into the year, Tukuafu is not guaranteed to make Seattle’s opening day roster, especially because the Seahawks are already certain to keep at least four running backs. In his most recent roster projection (obviously composed before Tukuafu’s signing), Condotta wrote that Seattle “hadn’t seen enough of the fullback contenders” to make the club keep one on the roster, but given that the coaching staff is familiar with Tukuafu, perhaps he’ll have a leg up.

Cliff Avril may have cost himself some long-term money when he reportedly turned down a three-year, $30MM extension offer from the Lions before the 2012 season. Avril ultimately played the 2012 season as a franchise player, then signed a more modest two-year deal with the Seahawks a year ago. However, as he told reporters yesterday, including Kyle Meinke of MLive.com, Avril doesn’t have any regrets or hard feelings toward the Lions, who didn’t re-engaged in contract discussions after applying the franchise tag on the defensive end.

“It’s not like I’m making pennies,” Avril said. “Again, I can’t complain. I’m fortunate enough to be where I’m at right now. There’s definitely no bitterness though.”