For a second time in three years, the Bears will need to replace their defensive coordinator. Chuck Pagano is preparing to retire, according to Kevin Fishbain and Adam Jahns of The Athletic (subscription required).

The former Colts head coach and cancer survivor spent two seasons as Chicago’s DC. The unit ranked in the top 10 in DVOA in each season. Pagano, 60, has been an NFL coach since 2001.

While Pagano’s defenses remained the anchor for offensively limited Bears teams, the group took a step back after Vic Fangio‘s 2019 departure. The Bears dropped from No. 1 in defensive DVOA in 2018 to eighth last season to eighth again this year. Certainly high marks, but with the Bears housing All-Pros in Khalil Mack, Akiem Hicks and Eddie Jackson — and another below-average offense — the team finished 8-8 and lost a one-sided wild-card matchup in New Orleans.

Pagano coached the Colts for six seasons, leading the team to three playoff berths. Despite a 2012 cancer diagnosis, he returned to the sideline later that season. In 2013, the Colts notched the second-greatest playoff comeback in NFL history — beating the Chiefs after trailing by 28 points — and a year later ventured to the AFC championship game. Pagano’s Indianapolis run began to decline soon after, however, and ended following a 2017 season in which Andrew Luck missed.

A college coach since the mid-1980s, Pagano broke out as a head coaching candidate while with the Ravens in the late 2000s and early 2010s. He coached with the Browns and Raiders as well, working with those franchises and the Ravens as a secondary coach before a one-and-done season as Baltimore’s DC in 2011, and was with the Miami Hurricanes from 1995-2000.

Chuck Pagano had a largely successful run as the head coach of the Colts, but he’s not interested in taking that title again in his career, as ESPN.com’s Jeff Dickerson writes. The Bears’ new defensive coordinator says he’s excited for his fresh challenge and doesn’t anticipate wanting an HC job after the 2019 season.

“I’m not. I’ve done it,” Pagano at his introductory presser. “I’m motivated to just help coach Matt Nagy be successful. Help this organization be successful. Help these kids grow and develop. That’s my motivation is to be the best I can be for this organization, for the McCaskey family, for Coach Nagy and for these players and for these coaches and help develop these guys. That’s the only thing I want to do.”

The Bears hired Pagano earlier this month to replace Vic Fangio after he left to become head coach of the Broncos. It’s unquestionably a great opportunity for Pagano as he’ll be handed the keys to one of the league’s most talented defenses. He’ll have a great deal of freedom and creative control too as head coach Matt Nagy puts the bulk of his focus on the offense.

“Our vision for this defense is to be the best,” Pagano said. “Can we be the best in the history of the game? The pieces are there, and they will continue to add pieces. Can we continue to be better than we were last year? Absolutely. It’s going to be very, very difficult and a huge challenge, but one we will be up for.”

For what it’s worth, Pagano interviewed with the Broncos and Packers for their HC openings in this past cycle, so a change of heart may not be out of the question. 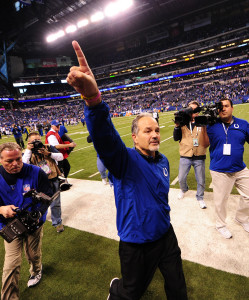 On Thursday, it was reported the Bears had interest in speaking with former Colts head coach Chuck Pagano about their open defensive coordinator role. Those reports were confirmed, as the team was expected to sit down with Pagano on Friday, Brad Biggs and Rich Campbell of the Chicago Tribune write.

The Bears are emphasizing finding a replacement for Vic Fangio — who accepted the head coaching gig in Denver — who has experience in operating a 3-4 scheme and Pagano checks that box from his time in Indianapolis and with the Ravens as defensive coordinator.

Chicago is not the only team interested in Pagano. The Browns, Cardinals and Jets have all shown interest in the 58-year-old coach for their defensive coordinator. Before the spots were filled, he also interviewed for head coach with the Packers and Broncos.

Before spending 2012-17 with the Colts as head coach, Pagano found success as defensive coordinator with the 2011 Ravens, which he helped lead to the AFC Championship game. During that season, Baltimore boasted the league’s No. 3-ranked defense both in points and yards allowed.

The Bears are arguably the top landing spot for any defensive coordinator in 2019. In addition to having the top scoring defense with the most takeaways in 2018, the team also possesses a game-breaking talent in Khalil Mack to build around for the next several seasons.

After losing ex-DC Vic Fangio — who became the Broncos’ head coach — earlier this week, the Bears attempted to land former Jets head coach Todd Bowles as their new defensive play-caller, but he ultimately followed Bruce Arians to Tampa Bay. Fangio led a defensive unit which ranked first in nearly every defensive metric, and is so well-stocked with talent that, as Biggs notes, general manager Ryan Pace and head coach Matt Nagy shouldn’t have trouble generating interest in the open position.

Donatell has been a Fangio disciple since 2011, following the longtime DC to both San Francisco and Chicago as a defensive backs coach. He’s also served as a defensive coordinator for the Packers (2000-03), Falcons (2004-06), and Redskins (2008). Per Biggs, Donatell’s contract with the Bears has run out, and if he’s not promoted to DC in Chicago, he’s likely to leave to join Fangio in Denver. Donatell has already had two stints as the Broncos’ defensive backs coach.

Pagano, 58, didn’t coach last season after being fired by Indianapolis, but he’s generated plenty of interest during the 2019 hiring cycle. He interviewed for both the Packers and Broncos head coaching positions, and has since been mentioned as a DC candidate for the Jets, Browns, and Cardinals. Just today, Pagano interviewed for a defensive backs coach position with the Panthers.

Both the Cardinals and Browns are interested in hiring former Colts head coach Chuck Pagano as defensive coordinator, according to Kent Somers of the Arizona Republic (Twitter link). Pagano may indeed be the favorite for the Arizona job, per Somers.

Pagano, 58, didn’t coach last season after being fired by Indianapolis, but he’s generated plenty of interest during the 2019 hiring cycle. He interviewed for both the Packers and Broncos head coaching positions, and has since been mentioned as candidate to take over as the Jets’ defensive coordinator under new head coach Adam Gase. Just today, Pagano interviewed for a defensive backs coach position with the Panthers.

The Cardinals are looking for a veteran defensive coordinator to pair with rookie head coach Kliff Kingsbury, and Pagano — who’s been coaching the NFL for nearly two decades — would certainly fit that bill. He also runs a 3-4 defense, the same scheme which Arizona prefers to deploy. Thus far, the only other candidate that’s been linked to the Cardinals’ DC gig is longtime NFL coach Dom Capers.

Like Arizona, Cleveland also hired a first-time head coach. Freddie Kitchens was a positional coach to open the 2018 season and had never ever served as a coordinator until midway through last year, so he could use an experienced defensive play-caller at his side. After installing Kitchens as their head coach, the Browns parted ways with former interim head coach/DC Gregg Williams and a number of defensive assistants. Cleveland is set to interview former Broncos’ head coach Vance Joseph for their defensive coordinator position on Friday.

The Browns went 5-3 under Williams in the second half of 2018, but the Browns gave most of the credit for that to offensive coordinator Freddie Kitchens, who was promoted to the role of head coach this week. After Kitchens was bumped up, the Browns and Williams parted ways.

Williams was widely mocked for last year’s assertion that several teams wanted him as a head coach, but there’s no denying that he is a highly-respected defensive mind. The Jets have serious holes on defense – specifically, their pass rush – but there is an opportunity for Williams to thrive in New York with players like safety Jamal Adams and $100MM+ in expected cap room to address areas of need.

Pagano’s name has surfaced again in the latest coaching cycle and he interviewed for the Packers’ and Broncos’ top jobs. At this stage, he’s realistically only in the running for lower staff positions. Aside from the Jets’ reported interest, the Panthers are set to meet with him to discuss their defensive backs coach position, according to Mike Florio of PFT. 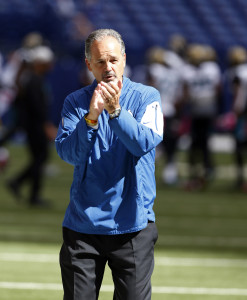