The Browns will interview former Broncos head coach Vance Joseph for their vacant defensive coordinator position on Friday, according to Adam Schefter of ESPN.com (Twitter link). 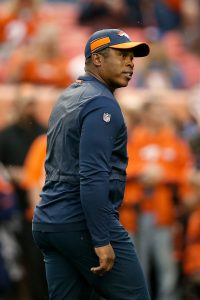 Joseph wasn’t successful during his run in Denver (11-21 record), but he was viewed as a desirable defensive coordinator during his time with the Dolphins in 2016. He’s generated plenty of DC interest thus far in 2019: Joseph interviewed for the Cardinals’ coordinator job on Thursday, and is reportedly in contention for the same role under Adam Gase in New York.

Joseph is also technically still in contention for the Bengals’ head coaching position. He’s familiar with Cincinnati management after spending two years in town as the club’s defensive backs coach, but if he were the Bengals’ choice for head coach, the announcement likely would have already been made. Joseph isn’t under contract with any team after being fired by Denver, so there’s nothing stopping the Bengals from hiring Joseph immediately.

2 comments on “Browns To Interview Vance Joseph For DC”