The Colts in the 2000s centered their team around their passing attack and pass defense. The least likely member of this cornerstone group became a long-term Colt on this day 13 years ago. 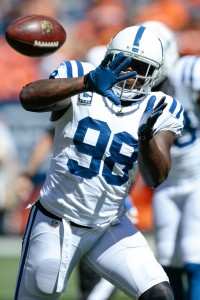 On June 16, 2006, the Colts ensured Robert Mathis, taken with a fifth-round pick out of Alabama A&M three years prior, would play in Indianapolis for many years. They signed the blossoming sack artist to a five-year, $30MM extension (with an $8.1MM signing bonus), which at the time made him one of the top-10 highest-paid defensive ends. That year changed the Colts’ trajectory, and Mathis played a key role in it.

From 2003-05, the Colts deployed Mathis as an off-the-bench defensive end. But he racked up 25.5 sacks (and 17 forced fumbles) in his first three seasons, doing so despite starting only one game. Raheem Brock started as Dwight Freeney‘s counterpart during each of Mathis’ first three seasons, but the Colts moved him to defensive tackle in 2006. Brock remained a Colts fixture up front until 2009, but Freeney and Mathis became the pass rush’s top bastions beginning with Mathis’ ’06 extension.

Interestingly, Mathis received his new deal before Freeney. But the latter’s rookie contract contained more years, and much more money, allowing the Colts to table that extension until 2007. (Freeney signed a six-year, $72MM contract in ’07.) Both players were full-timers for the Colts for the next seven seasons, the first of which doubling as the franchise’s second Super Bowl championship (and first in Indianapolis). In his age-25 season, Mathis led the Super Bowl champion Colts edition in sacks.

Mathis, Freeney, Peyton Manning, Marvin Harrison, Reggie Wayne and Jeff Saturday became the linchpins of that Colts era, with the franchise allowing Edgerrin James (franchise-tagged for $8MM in 2005) to walk just prior to the Mathis extension. The Division I-FCS product outlasted all of his peers in Indianapolis.

Although Mathis did not make a Pro Bowl until 2008, the decision to extend him worked out marvelously for the Colts. Mathis went on to play 11 more seasons with the franchise, his 193 games sitting second only to cornerback Eugene Daniel in the Colts’ Indianapolis history. Mathis’ 123 sacks are a Colts record; his 54 forced fumbles are the most of any player in the past 25 years.

Colts defensive end Robert Mathis has announced that he will retire after the 2016 season. That means Sunday’s contest against the Jaguars will be his final NFL game.

[RELATED: Jim Harbaugh A Match For The Colts?]

Mathis, 35, has spent his entire career with the Colts since being selected in the fifth round of the 2003 draft. Across his 14 years (13 seasons) with the Colts, Mathis earned five Pro Bowl nods and one First-Team All-Pro selection. The defensive end will go down as an all-time Colts great, particularly for the first ten years of his career in which he averaged 10.0 sacks per season. In 2013, Mathis led the entire NFL with 19.5 sacks.

Mathis has four sacks and 17 total tackles in 13 games played this season. He also has two forced fumbles and one fumble recovered for a touchdown. The advanced metrics indicate that Mathis has lost a step or three and that this is probably a good time for him to step away from the game. Pro Football Focus ranks Mathis as one of the ten worst qualified edge defenders in the NFL this season.

We here at Pro Football Rumors wish No. 98 nothing but the best in retirement.

When I ranked Anquan Boldin as the second-best offensive free agent left on the market, I noted that even as he ages, the veteran receiver continues to maintain consistent production, managing at least 65 receptions in each of the past five seasons, and averaging nearly 1,000 yards and five scores during that period. So why is he still unsigned? Albert Breer of the TheMMQB.com wanted an answer to that question, and asked a scouting director for a response. The executive’s position on Boldin? “He’s old and can’t run.”

With that blunt answer out of the way, let’s take a look at several more notes from around the league…

The Raiders signing of Aldon Smith isn’t an indication that the linebacker will avoid punishment for his arrest in August, writes Mike Florio of ProFootballTalk.com. According to the writer, the NFL is currently “reviewing Smith’s case under the substance-abuse policy,” with the DUI charge being the main focus.

While he could be considered a repeat offender, Florio notes that the vandalism and hit-and-run charges “won’t create any significant problems” since they don’t involve violence against another person.

The issue surrounding Smith could be the potential violation of his treatment plan stemming from his previous substance-abuse punishment. If the linebacker is in Stage 3 of the program, Florio says he could be subject to a one-year suspension.

After releasing longtime backfield weapon Fred Jackson earlier this week, the Bills could find themselves without his replacement, LeSean McCoy, for their Week 1 matchup with Indianapolis on Sept. 13. McCoy, the Bills’ big-ticket offseason acquisition, has been dealing with a hamstring injury since last month and was noncommittal about his status for the opener when asked by reporters Friday.

“We’ll wait and see,” he said, according to ESPN.com. “Only thing I can do is control what I can control, and that’s just working hard and getting treatment and getting ready to go get out there.”

“I’m not gonna get into those type of scenarios, the what-ifs and all that type of stuff. I know one thing: This football team will be ready. Period,” he said.

After taking a look at a few Thursday headlines out of the NFC this morning, we’ll shift our attention to the league’s other conference and check in on the latest from around the AFC….

As speculation swirls around the idea of Jon Gruden reuniting with the Raiders, the Monday Night Football analyst did his best to quell that talk in an appearance on ESPN Radio’s Mike & Mike today, as Dan Hanzus of NFL.com writes. Meanwhile, it’s not a certainty that GM Reggie McKenzie will be the person to make the next coaching hire. McKenzie himself acknowledges that he’s on the hot seat. “I work every day like my job is on the line. That’s just the way I am. No one has to tell me my job is on the line. No one,” McKenzie said, according to Scott Bair of CSNBayArea.com. Here’s more out of the AFC..