Devin Funchess is heading to Indy. NFL.com’s Tom Pelissero tweets that the free agent wideout will sign a one-year deal with the Colts. The deal is worth $13MM ($10MM plus another $3MM in incentives), according to veteran NFL reports Chris Mortensen (via Twitter). 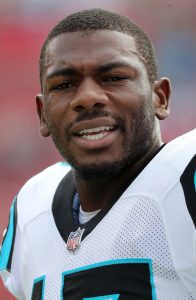 The 24-year-old has yet to fully put it together through his first four years in the NFL. With Kelvin Benjamin out of the picture, Funchess seemed to be taking a step forward in 2017, as he finished the campaign with 63 receptions for 840 yards and eight touchdowns.

However, the wideout took a step back in 2018, compiling only 44 receptions for 549 yards and four scores in 14 games (12 starts). His downtick in product could be partly attributed to quarterback Cam Newton‘s injury. Funchess’s production also took a dip after he returned from a back injury.

He should certainly have a chance to revitalize his career playing alongside Andrew Luck in Indianapolis. With T.Y. Hilton requiring attention from the opponent’s top cornerback, Funchess should have a chance to build off his 2017 numbers. At the very least, he’ll provide Luck with a big target alongside Hilton, Zach Pascal, and tight ends Eric Ebron and Jack Doyle.