The 18-game NFL regular season sees another record fall. In the Dolphins’ first drive of today’s game against the Patriots, quarterback Tua Tagovailoa found his favorite target, receiver Jaylen Waddle, three times, pushing Waddle’s rookie-season total receptions to 102 and cementing that Waddle would end the day with an NFL record.

Waddle finished the game with 5 catches for only 27 yards, but those first three catches resulted in Waddle passing Anquan Boldin for most receptions in a single season for a rookie in NFL history. Boldin’s record of 101 receptions has stood since 2003. Waddle came into the game with 99 catches, so his 5 today make the new mark to beat 104.

Like most records this season, this will have a bit of an asterisk on it, since the record was reached in an 18-week season, as opposed to a 17-week season. While Waddle did technically catch more balls in the same amount of games as Boldin, Waddle did have the benefit of a week of rest outside the traditional bye week when he missed their Week 15 game against the Jets on the reserve/COVID-19 list.

Waddle was joined today by T.J. Watt who tied Michael Strahan’s record for most sacks in a single season with 22.5. While Watt also had the luxury of being able to miss a game and still play the same amount of games that Strahan did back in 2001, Watt actually accomplished his total while only appearing in 15 games this year. This is sure to be a continuing trend in the coming years as players are given an additional opportunity to pad their stats.

Here’s an interesting one – the Bills have released Anquan Boldin from the reserve/retired list, as Mike Rodak of ESPN.com writes. The move allows him to sign with another team, if he wants to continue playing.

A quick refresher on the Boldin saga: the veteran wide receiver signed with the Bills during training camp, but retired less than two weeks later. During the season, Boldin’s agent requested his release, but he was denied by GM Brandon Beane. At one point in time, the rival Patriots had interest in signing him.

“We made a commitment to Anquan, and he made a commitment to us back in [training] camp,” Beane said in November. “He left for the reasons he mentioned back in August. We invested in him — invested time and committed to him — and we wouldn’t want to just put him out on the market to see him go sign with the Patriots or the Dolphins or anybody that can get in our way or work against us.”

Boldin, 38 in November, is free to do as he pleases. But, given his age and his remarkably low 8.7 yards per reception in 2016, it’s not clear what he has left to offer. 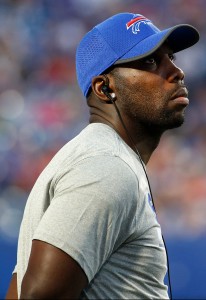 The Bills have no intention of releasing wide receiver Anquan Boldin from his contract, but could still trade the veteran wideout per his request, as general manager Brandon Beane told reporters, including Joe Buscaglia of WKBW (Twitter link). 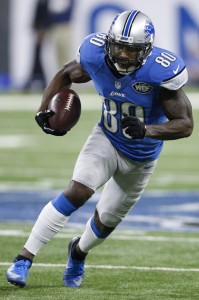 Boldin, 37, signed a one-year, $2.75MM deal with Buffalo earlier this year, but retired in August after the club traded away wide receiver Sammy Watkins and cornerback Ronald Darby. However, Boldin now wants to make a comeback and would like to be traded or have the Bills release his rights. Beane told reporters that he “doesn’t expect much” in terms of trade offers for Boldin, which could mean the longtime NFL wideout could stay put through Tuesday’s trade deadline.

While Beane has not personally spoken with Boldin, the GM said Boldin would prefer to play closer to his Florida residence, according to Mike Rodak of ESPN.com (Twitter links). Additionally, Beane wouldn’t rule out Boldin returning to the Bills, who have surprised with a 4-2 record and coincidentally boast one of the league’s worst wide receiving corps.

In 2016, Boldin appeared in all 16 games for the Lions, and managed 67 receptions for 584 yards and eight touchdowns. While the yardage total was the lowest of Boldin’s career, his eight scores were the most he’s posted since 2008. Boldin, a three-time Pro Bowler, played on 80% of Detroit’s offensive snaps as the club’s third receiver behind Golden Tate and Marvin Jones. 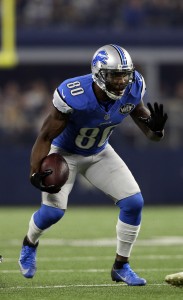 Tom Brady offered hopes Julian Edelman could come back this season after the Patriots‘ third preseason game Friday night, but after the team confirmed earlier today the ninth-year wideout tore his right ACL, the Pats will have to adjust again. The team’s primary slot receiver post-Wes Welker, Edelman recorded a career-high 1,106 receiving yards last season and played in 16 games. Edelman missed nearly half the season in 2015, and Brady’s production dipped without his top volume target. The iconic quarterback’s completion rate plummeted from 68 percent in nine Edelman games to 60 percent in seven contests without him. But the Patriots, as Mike Florio of Pro Football Talk notes, are deeper now and are expected to use a group effort to replace the 31-year-old receiver.

New England now employs Brandin Cooks and Chris Hogan, along with second-year player Malcolm Mitchell and a slew of viable receiving backs. Danny Amendola served as Edelman’s primary replacement in 2015, and the veteran figures to be part of the solution two years later. Florio uses New England’s 2016 Super Bowl run as an example of the resourceful team winning without a key pass-catcher. While the Pats won Super Bowl LI without Rob Gronkowski‘s services down the stretch, it’s hard to bank on the all-world tight end being available throughout this now-Edelman-less season. That said, Gronkowski did play in 15 games in both 2014 and ’15. Brady’s only played one game without Gronk or Edelman — 2015 loss to the Eagles — since the pair became the Patriots’ top chain-movers four years ago.

Here’s the latest fallout from the injury situation.