The Eagles and Jason Peters have agreed to an extension, per a team announcement. It’s a one-year addition that should keep the left tackle in Philadelphia through the 2019 season. 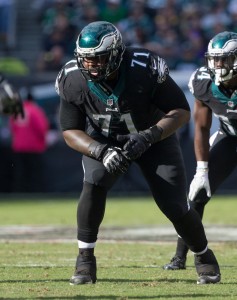 [RELATED: Eagles Didn’t Get Into Bidding War For Jeremy Maclin]

Peters told reporters on Tuesday that he wanted a restructured contract. What he didn’t tell the media was that his reps and the Eagles were apparently on the doorstep of getting something done.

Originally, Peters’ contract took him through 2018 with little in the way of guaranteed money. Now, he has $15.5MM in guarantees over the next three years and can earn a maximum of $32.5MM, according to Ian Rapoport of NFL.com (Twitter links). As a part of that $15.5MM in guarantees, $8MM will come in the form of a signing bonus. The new contract may allow Peters to retire with the Eagles. Meanwhile, the team may get some cap relief.

In 2016, the advanced stats at Pro Football Focus placed Peters as the eighth-best tackle in the NFL. His 88.3 overall score on PFF ranks as the third-highest showing of his career. For his career, he has made nine Pro Bowls and is a three-time first-team All-Pro.