Bengals linebacker Vontaze Burfict is facing a four-game suspension for violating the NFL’s Performance Enhancing Drug policy, according to Adam Schefter of ESPN.com (on Twitter). He’ll presumably appeal, though no hearing date has been set as of this writing. 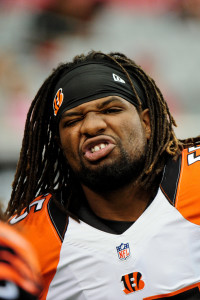 Burfict is no stranger to suspensions, but this marks his first potential ban for PEDs. In the past, Burfict has been sidelined for violations of league safety rules.

In the 2016 playoffs, Burfict was penalized for an illegal hit to the head on Steelers wide receiver Antonio Brown, which led to a suspension to start the 2016 season. In 2017, he was handed a five-game ban for a hit made on Chiefs fullback Anthony Sherman in the preseason. That suspension was later reduced to three games.

Between injuries and suspensions, Burfict has missed 28 regular season games over the past four years. Still, he is among the very best at his position. Last year, Burfict managed 69 tackles and 1.5 sacks in his partial season.

If Burfict loses his appeal, the guarantees in his three-year, $33MM contract will void, as Ian Rapoport of NFL.com (on Twitter) notes. If that $11.3MM guarantee is wiped out, the Bengals will have the ability to move on from Burfict – if they want to – without fiscal penalty.