Nick Fairley‘s hope of returning to the NFL seemingly took a hit on Friday afternoon. According to Mark Inabinett of AL.com, the free agent defensive tackle was arrested yesterday in Mobile, Alabama and charged with two counts of menacing.

Mobile Police told Fox10News that Fairley was arrested after allegedly threatening someone with a gun. The menacing charges are a misdemeanor, and no one was injured in the incident. Fairley grew up in Mobile and attended Williamson High School.

The 30-year-old hasn’t appeared in an NFL game since 2016, when he compiled career-highs in tackles (43) and sacks (6.5) in 16 games with the Saints. New Orleans subsequently signed him to a four-year, $30MM extension, but the defensive line was later placed on the non-football injury list due to a heart condition.

Fairley spent the majority of the 2017 campaign on the NFI before being released by the Saints towards the end of the season. The 2011 first-rounder out of Auburn indicated that he still wanted to play in the NFL. Last we heard, Fairley hadn’t been medically cleared to return to the field, and the veteran has failed to generate any interest this season. In the meantime, the Saints were able to open $3MM in cap space after filing a grievance with the NFL.

Nick Fairley and the Saints each filed grievances with the NFL over the former New Orleans defensive tackle’s contract, and one of the details from the result of those proceedings with the league has emerged.

The Saints will see a $3MM bump in cap space because of this, Mike Triplett of ESPN.com reports. This will come in the form of a cap credit, with bonus money from Fairley’s contract being returned to the team, per Triplett.

It’s not certain if this grievance has been fully resolved, or how money from Fairley’s $14MM guarantee will be distributed. The Saints signed Fairley to a four-year, $28MM contract last March, but after a quality season in 2016, Fairley was diagnosed with a heart condition. He has not played since and may well have played his last down as an NFL player. 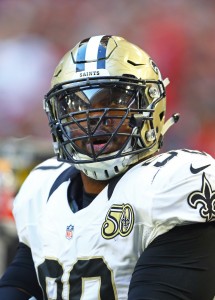 Drew Brees has already claimed that he has no intention of testing the free agent market, and Saints general manager Mickey Loomis said today that doesn’t anticipate any “big issues” in negotiating a new deal for the the veteran quarterback, according to Josh Katzenstein of NOLA.com. However, Loomis did admit the Saints and Brees have not yet entered into talks regarding a fresh contract. New Orleans used a void provision when it re-signed Brees prior to the 2016 campaign, so if the club fails to ink another deal with its 39-year-old signal-caller this offseason, it will absorb an $18MM dead money charge in 2018.

The heart condition that will shelve Saints defensive tackle Nick Fairley this year seems increasingly likely to end his career. Saints doctors don’t expect Fairley to return to the field, according to Joel Erickson of the Advocate, and head coach Sean Payton said Wednesday that the defender’s condition will not improve over time. Further, Payton added that he’s not aware of any procedure capable of fixing it.

Payton stopped short of declaring that’s Fairley done for good, saying: “I would never sit at this table and use that word never. As we sit here today, though, we’ve prepared ourselves for him not playing this season. … The good side to that is, fortunately, this was discovered not the hard way.”

It’s possible the Saints will attempt to recoup some of the money they awarded Fairley in free agency, when they re-signed him to a four-year, $28MM contract that includes $9MM in guarantees and an $8MM bonus. Speaking Wednesday, general manager Mickey Loomis didn’t rule out trying to recover some of Fairley’s contract.

“I’d rather not answer that, because I don’t know yet,” Loomis said. “I don’t know how it’s going to resolve itself. Those are difficult questions there. … We’re a lot more concerned about Nick himself than we are about that, although that is a concern.”

It could hurt New Orleans’ cause that its concerns over Fairley’s heart cropped up before the team handed him a new deal, and all 32 NFL clubs have been aware of his condition dating back to 2011. That was Fairley’s draft year, when the Lions chose him 13th overall. Fairley has been effective with the Lions, Rams and Saints over his six pro seasons, but it appears we’ve seen the last of the 29-year-old on the gridiron.

Nick Fairley‘s season has ended before it could even start. The Saints announced that the defensive tackle has been placed on the non-football injury list for the season due to his heart condition. He has been ruled out for 2017 and, unfortunately, he might not be able to play football again, Adam Schefter of ESPN.com (on Twitter) hears.

Fairley, 29, consulted with at least three doctors before reaching the conclusion that he could not play this year. He signed a four-year, $28MM deal to stay in New Orleans in March, but the Saints will now have to figure out a different plan at nose tackle. The team reportedly plans to use Tyeler Davison, a 2015 fifth-rounder, in the middle, though he is currently recovering from offseason shoulder surgery. Last year’s fourth-round pick David Onyemata could be called upon if Davison suffers a setback.

Beyond Davison and Onyemata, it stands to reason that the Saints could explore external options. PFR’s Dallas Robinson recently ran down some of the best available interior defensive linemen, but not all of those names are fits for the Saints’ 4-3 scheme.

Fairley started 16 games and posted 6.5 sacks during his first season with the Saints, grading out as the league’s 34th best interior defender among 127 qualifiers, according to Pro Football Focus. Per the terms of his deal, Fairley has already cashed in on $9MM in guarantees, including an $8MM signing bonus.