The Colts are leaving no stone unturned in their pursuit of quarterback help. In addition to Brock Osweiler, the Colts also met with and worked out Matt Cassel and Brandon Weeden, Ian Rapoport of NFL.com (on Twitter) hears.

At this time, the Colts are still unsure about which QB they’ll sign. It’s also possible that Indy will wait to see how cuts shake out over Labor Day Weekend – there could be several experienced signal callers available from which to choose.

The Colts’ QB room, of course, was shaken up when Andrew Luck abruptly announced his retirement from the NFL. That left Jacoby Brissett, a solid QB in his own right, as the club’s new starter. For now, Chad Kelly stands as the team’s QB2, though his two-game suspension will require another passer to step in, at least as a stopgap solution.

Cassel, 37, spent last season as Matthew Stafford‘s backup in Detroit. He threw a grand total of 17 passes in 2018 and has made just two starts in the last three years.

Weeden, who will turn 36 in October, has split time with the Cowboys and Texans in recent years, though he did not take the field in 2016 or 2017. The former first-round pick has a career 6-19 record with most of those appearances coming with the Browns in his rookie season.

The Texans are signing quarterback Brandon Weeden, according to Mark Berman of FOX 26 (on Twitter). Weeden spent last season with the Titans but did not throw a pass for them during the season.

Weeden has not seen the field since 2015 when he appeared in four games for the Cowboys and two for the Texans. The 34-year-old (35 in October) has a career 6-19 record.

The 6’4″ signal caller currently profiles as Deshaun Watson‘s top backup, but things can change between now and the start of the season, particularly with the draft right around the corner. The Texans are keeping their options open at quarterback and even conducted a private workout with Louisville’s Lamar Jackson in the event that he slides in the draft. 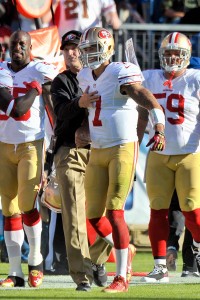 The Titans are planning to sign free agent quarterback Brandon Weeden, according to a league source who spoke with ESPN.com’s Field Yates (Twitter link). Weeden was one of four QBs to audition for Tennessee on Tuesday.

Weeden was cut by Houston in early September just as he was set to enter the second season of a two-year, $4MM deal. The 6’4″ signal caller has not seen the field since 2015 when he appeared in four games for the Cowboys and two for the Texans. The 33-year-old (34 on Oct. 14) has a career 6-19 record.

There has been no official word from the team, but the signing presumably means that Marcus Mariota will not be able to play this weekend. Matt Cassel will likely get the start, unless the team’s confidence is so shaken in him that they would rather start Weeden with only a few days of preparation.

With Marcus Mariota on the mend, the Titans are looking into adding a quarterback. The team auditioned Brandon Weeden, Matt Barkley, Matt McGloin, and T.J. Yates on Tuesday, according to Mike Florio of PFT (on Twitter).

Mariota is day-to-day with a strained hamstring and his status is up in the air for Sunday against the Dolphins. Currently, the Titans have only Matt Cassel on the roster with Tyler Ferguson on the practice squad. If Mariota can’t go, Ferguson could get promoted to serve as Cassel’s backup. Alternatively, the club may prefer to have a QB with some in-game experience at the ready.

The Titans lost by a score of 57-14 to the Texans on Sunday. After Mariota exited the game, Cassel completed 4-of-10 passes and threw two interceptions. He had 21 passing yards in total.

The team’s decision to not include Colin Kaepernick in the audition will raise some eyebrows, particularly since Kaepernick offers similar mobility to Mariota.

The Texans have cut veteran backup Brandon Weeden, according to a source who spoke with Aaron Wilson of The Houston Chronicle (on Twitter). The Texans were expected to carry three QBs on the roster, so this comes as a bit of a surprise.

Tom Savage will serve as the Texans’ starter while first-round pick Deshaun Watson will be his understudy. Of course, the pecking order could change quickly if Savage struggles.

SATURDAY, 8:40am: The Texans have officially announced the signing.

3:08pm: The Texans have re-signed quarterback Brandon Weeden, as Mark Berman of FOX 26 tweets. Weeden has been vocal about his desire to stay put in Houston and, after about three weeks of free agency, he has gotten his wish.

Weeden, 32, began the 2015 season with the Cowboys, stepping in and making three starts when Tony Romo went down with an injury. While Weeden lost all three of those starts, he was hardly a disaster — he completed 72.4% of his passes, throwing for 739 yards, two touchdowns, and two interceptions.

Later in the season, having been cut by Dallas, Weeden got an opportunity to start again in Houston, and helped the Texans make the playoffs by completing 26 of 42 passes for 305 yards and three TDs over the span of two games (one start). Weeden won’t live up to the billing of being a first-round pick back in 2012, but he still looks the part of a capable backup. The veteran is likely going to serve as Houston’s No. 2 quarterback behind offseason acquisition Brock Osweiler.

Veteran Brian Hoyer is technically still on the roster, but the Texans are expected to part ways with him in the coming weeks. The Texans also have Tom Savage and B.J. Daniels under contract.

The Colts offered Jerrell Freeman the same three-year, $12MM deal that the Bears ultimately handed the 30-year-old linebacker, Charles Robinson of Yahoo.com reports (on Twitter). The No. 23 player on PFR’s list of 2016’s top free agents, Freeman spurned the Colts’ offer and decided to change agents, winding up in Drew Rosenhaus’ stable, according to Stephen Holder of the Indianapolis Star. Freeman held out for a better deal after not being scooped up during free agency’s opening two days, and the Colts moved on after Freeman turned down their initial offer, Holder reports.

Here’s at look at the latest free agent notes: