Phillip Gaines is re-signing with Houston. Aaron Wilson of the Houston Chronicle reports (via Twitter) that the veteran cornerback has signed with the Texans. It’s a one-year deal worth the veteran’s minimum.

The 28-year-old has bounced around the league a bit since being selected in the third round of the 2014 draft. His best season came with the Chiefs in 2016, when he had 44 tackles, seven passes defended, an interception, and two forced fumbles.

After splitting the 2018 season with the Bills and Browns, Gaines signed with the Texans last September. After appearing in six games (two starts) for his new squad, Gaines landed on the injured reserve.

The Texans were presumably eyeing some cornerback reinforcement after the squad and Johnathan Joseph mutually agreed to part ways. On the flip side, the organization has reportedly made re-signing Bradley Roby a priority.

Texans cornerback Phillip Gaines is set to undergo season-ending ankle surgery, according to Aaron Wilson of The Houston Chronicle. Per a source, Gaines will be placed on Injured Reserve after suffering a severe high-ankle sprain in yesterday’s loss to the Colts. The recovery is expected to take five months.

Gaines has been a rotational player since entering the league in 2014. Entering the sixth year of his career, Gaines had yet to start less than three games in a season, but never more than six. Houston had begun using him more prominently as the season went on, starting the team’s previous two games before leaving the game yesterday.

While Gaines was not signed to be a starter, he was called into action once Bradley Roby and Johnathan Joseph went down with injuries. Now down another member of their secondary, the Texans decided to trade a third-round pick in the upcoming draft for Raiders cornerback Gareon Conley earlier today. It appears likely that Conley will step into Gaines’ place in the lineup.

In the wake of Monday night’s heartbreaking loss, the Texans are making a surprising move. Houston is releasing veteran cornerback Aaron Colvin, according to Adam Schefter of ESPN.com (Twitter link). 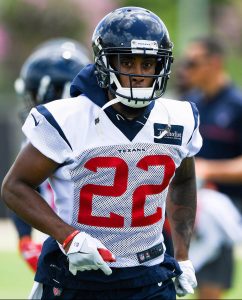 In a corresponding roster move the team signed fellow corner Phillip Gaines to a one-year deal, according to a tweet from Aaron Wilson of the Houston Chronicle. The Texans are taking a massive financial loss by cutting Colvin right now. Just last March, they signed him to a four-year, $34MM deal with $18MM in guaranteed money. As Schefter pointed out, he still had a $7.5MM guaranteed salary for 2019 which Houston will now be eating.

Colvin originally entered the league as a fourth-round pick of the Jaguars back in 2014. After spending his first four years in Jacksonville, he landed the massive deal from his former AFC South rivals. The marriage was never a good fit from the start, and it was clear right away there were problems.

Colvin started only two games last year, and also missed time with an ankle injury. He started last night’s game against the Saints and that was apparently the final straw as Houston’s secondary struggled to contain Drew Brees. The Texans have been sniffing around for cornerback help for a while and have now settled on Gaines, a 2014 third-round pick of the Chiefs.

After four years in Kansas City, Gaines started six games for the Bills last year and also spent some time with the Browns. Colvin thrived as a nickel corner in Jacksonville, and should draw significant interest on the open market, albeit at a much cheaper price. As Adam Caplan of Sirius XM points out in a tweet, longtime Texan Johnathan Joseph and fellow starter Bradley Roby are both in the final year of their deals, so Houston’s secondary could look quite a bit different in 2020.