After their most successful season this century, the Jaguars are firmly committed to their power structure. The Tom Coughlin/Dave Caldwell/Doug Marrone triumvirate is now signed through 2021 after the extensions announced Friday, and this season looks to have played a key part in Shad Khan‘s decision. The owner approached his top staffers about these extensions shortly after the Jags’ AFC championship game loss to the Patriots, Ryan O’Halloran of the Florida Times-Union reports.

For Caldwell, this marks the second two-year extension in as many offseasons. The GM signed one in January 2017 on the same day he was stripped of some of his decision-making abilities, but he’ll continue to work with Coughlin for the foreseeable future. This comes after some in league circles believed Coughlin would attempt to push Caldwell out of the picture, per O’Halloran, if last season did not go well. In particular, Blake Bortles‘ play was key in this scenario, O’Halloran writes. Caldwell had overseen four straight losing seasons since taking over the Jags’ reins in 2013.

Here’s the latest out of the South divisions:

The Falcons are reuniting with linebacker Sean Weatherspoon, a source tells Adam Schefter of ESPN.com (on Twitter). Weatherspoon will help fill in at linebacker now that rookie Duke Riley is set to undergo knee surgery. 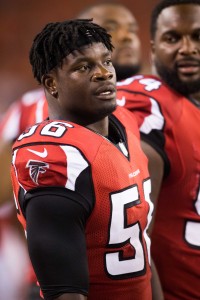 Weatherspoon, 29, was a first-round pick of the Falcons in 2010. Unfortunately, his career has been marred by injuries in recent years. In the last four years, he has made only 25 appearances – he missed the bulk of last season, rouhgly half of 2013, and the entire 2014 campaign.

In 2011, his only full season, he showed what he is capable of as he racked up 125 tackles and four sacks. If his knee and foot problems are behind him, he could perhaps be a quality contributor once again. The Falcons probably aren’t expecting that kind of stat line, but he could perhaps help the Falcons pivot out of their current three-game rut.

Assuming he dresses, Weatherspoon’s first game of 2017 will be a road contest against the scrappy Jets.

The Falcons made Schofield an offer early on in the offseason, but he held out for more money. Schofield appears to have misjudged the market as the Falcons did not improve their offer and interest from other teams was mild to say the least. The Patriots met with Schofield in August and the Jets hosted him on a visit in September, but neither meeting led to a deal.

Schofield, 29, followed Dan Quinn from the Seahawks to the Falcons, signing a one-year, $1.7MM deal with Atlanta last year. He finished the year with 28 tackles, four tackles for losses, two sacks, 13 quarterback hits, and one forced fumble.

Because they signed Schofield after the start of the regular season, the Falcons won’t be on the hook for the rest of his minimum salary.

Falcons linebacker Sean Weatherspoon has suffered a torn Achilles tendon, according to Vaughn McClure of ESPN.com (on Twitter). Weatherspoon will presumably be shut down for the season and placed on IR.

Sadly, this marks the second time that Weatherspoon has suffered an Achilles tear in his career. The 28-year-old (29 in October) missed the entire 2014 season thanks to that injury. In 2015, he left Atlanta for the Cardinals and saw just 159 defensive snaps. This offseason, he returned to the Falcons with the hope of earning more playing time. He started three of Atlanta’s four games this season, tallying 27 total tackles.

Weatherspoon originally entered the NFL as a Falcons first-round draft pick, joining the team as the 19th player selected in the 2010 draft. In 2011, his only full season, he showed what he is capable of as he racked up 125 tackles and four sacks. Unfortunately, he has since been held back by his Achilles issues plus knee and foot problems.

More than two years after playing his last game for the Falcons, linebacker Sean Weatherspoon is returning to Atlanta for the 2016 season. Ian Rapoport of NFL.com (Twitter links) reports that the Falcons and Weatherspoon have agreed to terms on a one-year contract. 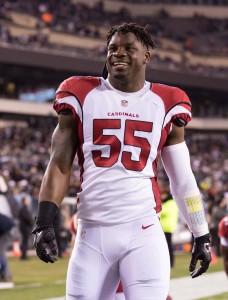 Weatherspoon, 28, originally entered the NFL as a Falcons first-round draft pick, joining the team as the 19th player selected in the 2010 draft. Over the next four seasons, Weatherspoon played 47 games for Atlanta — in 2011, he started all 16 games, racking up 125 tackles to go along with four sacks. In his final two seasons with the Falcons, however, he missed all but seven games due to an Achilles injury in 2014, and knee and foot issues in 2013.

The Cardinals signed Weatherspoon a year ago as a free agent, but the veteran linebacker didn’t play a major role in Arizona, earning just 159 defensive snaps. Another year removed from his Achilles injury, Weatherspoon will attempt to make an impact in 2016 for the Falcons.

Here is the latest on some of the top free agents still available and some of the talents who have already landed with new teams.

The NFC South champion Panthers are set to take on the Cardinals tomorrow in the NFC Championship, and while wait for that contest, let’s take a quick look at some notes out of Carolina’s division:

With quarterback Peyton Manning nearing a return from injury, the Broncos are on the brink of having to make the most important decision of their season, Troy Renck of The Denver Post offers.

The 39-year-old Manning was having a bottom-of-the-barrel season before he landed on the shelf in mid-November with a torn plantar fascia in his left foot, and his loss looked like addition by subtraction as the Brock Osweiler era got off to a solid beginning. Osweiler’s first three starts all ended up as wins for Denver, but some shine wore off two weeks ago in a 17-3 victory over a horrific San Diego team and matters worsened in a 15-12 loss to Oakland last Sunday.

Manning will be inactive for Sunday’s game against playoff-caliber Pittsburgh, but he’s likely to be healthy enough for activation by Week 16. That means Osweiler might be playing for the starting job at Heinz Field. As Renck points out, Denver’s Osweiler-led offense has gone 23 straight possessions without scoring a touchdown, which isn’t going to cut it with a prolific Steelers offense on the other side. With another underwhelming showing from Osweiler, head coach Gary Kubiak could turn back to Manning as the playoffs near.

Some other NFL news and notes: