If the Buccaneers aren’t able to retain soon-to-be free agent quarterback Mike Glennon, it won’t be for lack of trying. The Bucs have offered to make Glennon the highest-paid backup signal-caller in the NFL, according to Rick Stroud of the Tampa Bay Times. Specifically, Tampa Bay has attempted to keep Glennon at upward of $8MM per year, tweets Jason Cole of Bleacher Report. 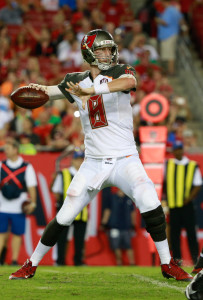 The Eagles’ Chase Daniel is the highest-paid reserve QB in the league, having inked a three-year, $21MM deal with incentives as a free agent last offseason. Daniel is now drawing trade interest and could start somewhere next season. Glennon also hopes to become some team’s No. 1, which isn’t going to happen on a Bucs club with Jameis Winston entrenched under center. The 27-year-old Glennon has a realistic chance to start elsewhere, though, as QB-needy teams like the Bears and Jets are targeting him in advance of March 9.

Since the Buccaneers selected him in the third round of the 2013 draft, the 6-foot-7 Glennon has logged 21 appearances and 18 starts, during which he has completed 59.4 percent of passes, averaged 6.5 yards per attempt and tossed 30 touchdowns against 15 interceptions. PFR’s Zach Links currently ranks Glennon 19th among the league’s impending free agents.