The Cardinals have reinforced the offensive line in the wake of Jared Veldheer‘s season-ending injury. The team announced the signing of Khalif Barnes on Tuesday.

Barnes, 35, was signed and released multiple times by the Saints over the course of the 2016 season, but he never appeared in a game for them. This offseason, he was among the team’s final cuts in early September. Now in Arizona, the 35-year-old will hope to see his first regular season action since January 3, 2016.

The former second-round pick is well past his prime, but he does offer experience at both tackle positions as well as guard. That versatility could come in handy as interior lineman Earl Watford is also on IR. Barnes has 117 career starts to his credit, but how, where, and when the Cardinals use him remains to be seen.

Khalif Barnes joined the Saints less than three weeks ago, but his tenure with the team has already come to an end. ESPN’s Adam Caplan tweets that the organization has released the offensive lineman. Nick Underhill of The Advocate notes (on Twitter) that the move was made to accommodate the one-day contract of Lance Moore, who subsequently retired with the organization. Underhill expects Barnes to re-sign with the team.

The Saints have clearly been enamored with Barnes for some time, as the organization signed the veteran four separate times during the 2016 campaign. However, the 35-year-old didn’t up making a single appearance last season. He ended up inking another contract with the Saints earlier this month, but the lineman didn’t even make it through OTAs this time around.

A team seeking leadership and versatility could certainly use Barnes. The 12-year veteran has more than 151 career games under his belt, including 117 career starts. His ability to play both offensive tackle and offensive guard will presumably make him ideal for a reserve role.

The Saints are expected to sign tight end Clay Harbor and offensive lineman Khalif Barnes on Monday, according to Nick Underhill of the Advocate (Twitter link). Both Barnes and Harbor worked out for New Orleans during a weekend minicamp session. 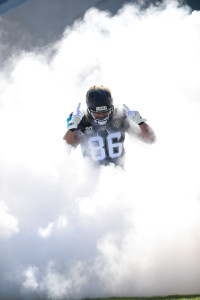 Harbor, 29, spent most of the 2016 campaign with the Lions after being released by the Patriots in early October. In 15 total games last season, Harbor managed only three total targets, so he’s not a offensive threat. But Harbor would give the Saints another option as a blocking tight end, and can also chip in on special teams. At present, New Orleans’ tight end depth chart is comprised of Coby Fleener, Josh Hill, and Michael Hoomanawanui.

Offensive lineman Khalif Barnes and cornerback Steve Williams have landed tryouts with the Saints and Cardinals, respectively, according to Nick Underhill of the Advocate and Darren Urban of AZCardinals.com (Twitter links).

Williams, 26, spent time with both the Chargers and Rams in 2016, appearing in six games (two starts) between the two clubs. Waived by the Rams in December, Williams worked out for the Ravens and 49ers but had yet to land a contract. While the Cardinals are still searching for a cornerback to play opposite Patrick Peterson, Williams would be relegated to special teams duty if signed.

Stop us if you’ve heard this one before. The Saints are signing Khalif Barnes to the roster, as Herbie Teope of The Times-Picayune tweets.

Today’s deal marks the fourth time that New Orleans has signed Barnes to the roster since Aug. 30. Barnes’ most recent stint on the 53-man roster ended about two weeks ago when the Saints bumped him for Joe Callahan. He’s back now, but if recent history is any indication, he might not be around for long. For his career, the 34-year-old has 151 appearances and 117 starts to his name, but he hasn’t taken the field yet this season.

The Saints freed up a spot for Barnes on Tuesday when they dropped defensive end Chris McCain.