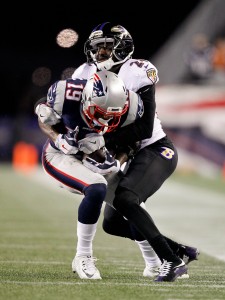 After restructuring Marshal Yanda‘s contract to create some additional cap flexibility, the Ravens have created a little more breathing room by reworking Kyle Arrington‘s contract. According to Jeff Zrebiec of the Baltimore Sun (Twitter link), the veteran defensive back has agreed to take a pay cut to remain in Baltimore.

Arrington, who signed a three-year, $7MM contract with the Ravens last year after spending most of his NFL career in New England, didn’t have a great 2015 campaign. Although he started 56 games for the Patriots, Arrington started just four of 15 contests for Baltimore, recording 28 tackles and no interceptions. Pro Football Focus graded him 80th out of 111 qualified corners.

Still, the Ravens apparently saw enough in Arrington that they wanted to keep him for the 2016 season. He had been scheduled to earn a $2.1MM bsae salary, with a cap number of $2.767MM, so his new agreement with Baltimore will reduce both of those numbers.

As Zrebiec notes (via Twitter), Arrington could be the frontrunner for the Ravens’ slot cornerback opening, with Lardarius Webb moving to safety.

2:33pm: Per Jeff Zrebiec of the Baltimore Sun (Twitter links), Arrington’s contract has a base value of $7MM, with a max value of $8.5MM. The deal includes $800K in first-year salary guaranteed, in addition to the cornerback’s $2MM signing bonus.

THURSDAY, 1:15pm: Arrington has passed his physical and officially signed a three-year deal which averages $2.5MM per year and features a $2MM signing bonus, tweets Wilson.

5:47pm: The Ravens have agreed to terms on a three-year contract with former Patriots cornerback Kyle Arrington, the team announced today (via Twitter). Arrington, released by New England on Monday, will officially sign with Baltimore after taking a physical. A starter for most of his time with the Patriots, Arrington saw his role reduced last year following the arrivals of Darrelle Revis and Brandon Browner to New England. Arrington played just 576 defensive snaps in 2014, recording 49 tackles and returning a fumble for a touchdown. Despite the 28-year-old’s relative lack of playing time, Pro Football Focus (subscription required) ranked him second among Patriots cornerbacks, behind only Revis.

A lack of guaranteed money on his $3MM salary for 2015 resulted in Arrington’s release, as the Patriots continue to overhaul the group of cornerbacks that helped them win the Super Bowl mere months ago. Revis and Browner signed as free agents with the Jets and Saints respectively, while Arrington and Alfonzo Dennard were both cut this month.

For the Ravens, the arrival of Arrington allows the team to upgrade a position that had been a weakness in 2014, providing some stability and depth at corner. Jimmy Smith and Lardarius Webb still figure to start on the outside, assuming they stay healthy, but Arrington looks like a good bet to see plenty of action in the slot.

The Ravens had been repeatedly linked to Arrington since he hit the open market on Monday, and the move to Baltimore will reunite him with defensive coordinator Dean Pees, who was still the DC in New England when Arrington first joined the Pats in 2009. Besides Baltimore, the Panthers were also mentioned as a potential suitor for Arrington.

As Ben Volin of The Boston Globe notes (on Twitter), Patriots owner Robert Kraft is one of three owners on the NFL Compensation Committee, which determines commissioner Roger Goodell’s pay. The other two owners on that committee are Arthur Blank and Jerry Richardson. One unidentified NFL owner told Mike Freeman of Bleacher Report (TwitLonger link) that he thinks the relationship between Kraft and Goodell is “pretty much dead” in the wake of DeflateGate, so that will be an interesting situation to keep an eye on going forward.