Rodney Gunter is calling it a career, at least temporarily. The Jaguars defensive end revealed last night that he’s stepping away from football at the advice of doctors. In a procedural move, the Jaguars placed Gunter on the reserve/retired list. 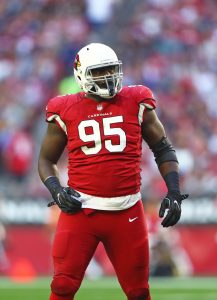 In a statement, Gunter explained that he was diagnosed with a severe heart condition, and he could have ruptured his aorta is he continued his football career. Surgery could eventually remedy the issue, and that would theoretically allow him to return to the football field. However, the 28-year-old currently doesn’t meet the specific criteria for the procedure, so he’s understandably stepping away from football as he awaits his next steps.

On Monday, head coach Doug Marrone praised the player’s offseason work ethic, and he revealed that he offered Gunter a staff position with the purpose of keeping him around the team.

“These are the things that are very difficult,” Marrone said. “Things come up that are out of your control and take away things that you love and want to do…It’s just an awful feeling. It really is. It’s just tough.”

The 2015 fourth-round pick had spent the first five seasons of his career with the Cardinals, including a 2019 campaign where he finished with 31 tackles and three sacks in 13 games. He signed a three-year, $18MM deal with Jacksonville this past offseason, and he was expected to replace traded defensive lineman Calais Campbell.

Rodney Gunter is signing with the Jaguars, reports ESPN’s Adam Schefter (via Twitter). It’s a three-year for the defensive lineman.

The 2015 fourth-round pick had spent his entire career with the Cardinals, including a 2019 campaign where he started a career-high 13 games. The 28-year-old has compiled 11 sacks through five seasons in the NFL, including 7.5 over the past two years.

The Jaguars have been busy revamping their defense over the past few days. The front office spent big money to get linebacker Joe Schobert to Jacksonville, and they also signed cornerback Darqueze Dennard.

Cardinals free agent defensive tackle Rodney Gunter is visiting today with the Packers, a source tells ESPN.com’s Adam Schefter (on Twitter). The Cardinals had a down year in 2018, but Gunter did well on an individual level.

Gunter, 27, entered the league as a fourth-round pick of the Cardinals. After spending his first three seasons in a reserve role, he appeared in all 16 games last year with ten starts and turned in career highs in sacks (4.5) and tackles (44). Gunter finished out with a respectable 70.1 overall score from Pro Football Focus, placing him 59th out of 112 qualified interior defenders.

Gunter could step in as a replacement for Muhammad Wilkerson, who continues to float in free agent limbo. If signed, he could also be a future fill-in for the likes of Kenny Clark and Mike Daniels. If Clark’s fifth-year option is not picked up in early May, he’ll be eligible for free agency after the ’19 season. Daniels, who was one spot ahead of Gunter on PFF’s rankings, is set to hit the open market next March.

The Cardinals have two more draft picks under contract, having signed second-round outside linebacker Markus Golden and fourth-round defensive lineman Rodney Gunter to their rookie deals today, according to Darren Urban of AZCardinals.com (Twitter link).

Urban notes that the moves leave three Cardinals draftees unsigned, tweeting that the contract for seventh-rounder Gerald Christian isn’t officially in the books yet. Aaron Wilson of the Baltimore Sun reported earlier today that Christian’s deal was done, so perhaps 2015’s “Mr. Irrelevant” has agreed to terms but not yet put pen to paper.

As for Golden and Gunter, Over the Cap’s data shows that the duo will be in line for respective signing bonuses worth about $1.11MM and $510K. For 2015, the Cardinals will have Golden and Gunter on their books for modest cap hits of approximately $712K and $562K, respectively.

Besides Christian, first-round tackle D.J. Humphries and third-round running back David Johnson have yet to formally sign their rookie contracts for the Cardinals.

Though the draft is over, the Eagles want to add more players, according to head coach Chip Kelly, who says the club want to bring in more offensive lineman and a tight end to replace James Casey (Twitter link via Geoff Mosher of CSNPhilly.com). Philadelphia could look to add UDFAs and/or veteran free agents in the coming weeks.

Let’s look at some more notes from the NFC:

Contract talks between the Seahawks and Russell Wilson are going “a little slow,” according to head coach Pete Carroll, reports Bob Condotta of the Seattle Times (via Twitter). They are talking, but are not progressing as fast as the two sides would like. Condotta writes that Adam Schefter of ESPN followed that news up by reporting that Wilson is looking for guaranteed money of a quarterback while the Seahawks are trying to sign him for less (via Twitter).

Here are some other notes from around the NFC West:

Cardinals Acquire No. 116 Pick From Browns

With the pick, Arizona will select Delaware State defensive end Rodney Gunter, according to Darren Urban of AZCardinals.com (on Twitter). He finished last season with 57 tackles and seven sacks.