Raiders Work Out S Will Blackmon

The Raiders may be in London, but that didn’t stop the team from auditioning a veteran defensive back. ESPN’s Field Yates reports (via Twitter) that the Raiders worked out safety Will Blackmon yesterday. The 34-year-old is currently working for the NFL Network and was in London reporting on the Bears/Raiders matchup. 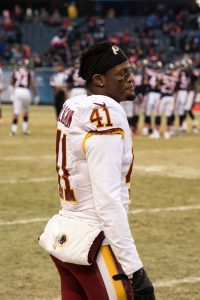 The 2006 fourth-round pick out of Boston College bounced around the league during his career, including stints with the Packers, Giants, Seahawks, Jaguars, and Redskins. He started 22 games between the 2013 and 2015 campaigns.

Blackmon’s last appearance came in 2016, when he compiled 41 tackles, three passes defended, and one pick in 15 games (six starts) for the Redskins. He was released by Washington the following preseason, and he later signed with the Saskatchewan Roughriders of the CFL in mid-2018. After appearing in only one game, Blackmon retired and joined the broadcasting ranks.

As Yates notes, the veteran has stayed in shape, and while he’s surely lost a step, he could still provide a team with a veteran presence in the secondary. The Raiders are currently rostering a trio of safeties behind starters Lamarcus Joyner and Karl Joseph: Curtis Riley, Erik Harris, and Dallin Leavitt.

Veteran defensive back Will Blackmon worked out for the Seahawks, Browns, Colts, and Falcons recently, according to Mike Garafolo of NFL.com (on Twitter). Blackmon will turn 34 in October, but he impressed in his workouts and Garafolo gets the sense that he’ll land with a team after the draft.

Blackmon appeared in 30 out of 32 possible appearances for the Redskins between 2015 and 2016, including 16 starts, but missed Washington’s final cut in 2017. Blackmon auditioned for the Colts in November, but did not sign with a team last season.

The veteran offers experience at both safety and cornerback. Blackmon played almost exclusively at corner between 2013 and 2015, but shifted to safety in ’16 when the Redskins added Josh Norman. The move to safety suited him well as he earned his best marks ever from Pro Football Focus. PFF placed him as the 32nd in the league at the position in that season, ahead of notables like Shawn Williams, Bradley McDougald, and T.J. Ward.

The Redskins have cut veteran safety Will Blackmon, two sources tell Mike Jones of The Washington Post (on Twitter).

Blackmon has appeared in 30 out of 32 possible appearances for the Redskins over the last two years, including 16 starts. He played corner in 2015 but shifted to safety last year when the team signed Josh Norman.

Blackmon had 39 total tackles, one interception, three passes defensed, and half a sack last year. In his 570 snaps on defense, he earned a strong 79.7 overall score from Pro Football Focus, placing him as the 32nd best safety in the league. He placed ahead of notables like Shawn Williams, Bradley McDougald, and T.J. Ward.

July 14th, 2017 at 9:11pm CST by Connor J. Byrne
There’s still no movement toward a deal between the Rams and cornerback Trumaine Johnson, per ESPN.com’s Alden Gonzalez, who’s the latest to report that he’ll play 2017 under the franchise tag. Yahoo Sports’ Charles Robinson relayed earlier this week that no agreement would come to fruition by Monday’s deadline, meaning Johnson will play the season as the NFL’s highest-paid corner. Johnson will earn $16.742MM in his second straight year as the Rams’ franchise player, and the likelihood is that he’ll test the free agent market next offseason. Tagging him again isn’t going to happen because doing so would cost the Rams $24.1MM.
Elsewhere around the NFC…

On Wednesday morning, Washington coach Jay Gruden addressed reporters at the owners’ meetings. Here’s everything you need to know:

Washington To Re-Sign Will Blackmon

Washington has agreed to terms with cornerback Will Blackmon on a new two-year contract, reports Jason La Canfora of CBSSports.com (via Twitter). Blackmon, who received an offer from the team last week, reportedly received interest from other clubs and took the weekend to mull his options before making a decision.

Blackmon, 31, joined Washington as a depth piece in the secondary a year ago after making stops with the Packers, Giants, and Jaguars between 2007 and 2014. While the veteran corner wasn’t expected to play a major role, he ended up making a career-high 10 starts for Washington in 2015, as fellow free agent addition Chris Culliver missed a good chunk of the year due to a suspension and injuries.

While Blackmon earned nearly 900 defensive snaps, Pro Football Focus wasn’t overly fond of his play, ranking him 84th out of 111 qualified cornerbacks. Still, it would be a surprise if the former fourth-round pick doesn’t at least get an opportunity to compete for the nickel back role in 2016.