The Panthers waived running back C.J. Anderson, according to a team announcement. Anderson was signed in May, but he was used far less than anticipated this season. 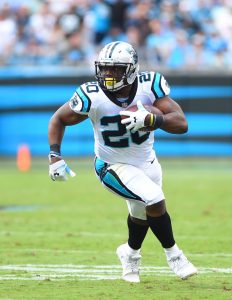 “When we signed C.J. in the spring he saw a bigger role than he has had, and honestly, at the time so did we,” general manager Marty Hurney said in a statement. “But Christian McCaffrey has taken so much of the offense and so much of the plays, we just made the decision that this was the best thing for all parties involved.”

Anderson, 27, was a surprise cut by the Broncos after he ran for more than 1,000 yards in 2017. The 27-year-old wanted to reassert himself in Carolina, but he wound up with just 24 carries in nine games. On the plus side, he was efficient in that limited sample as he averaged 4.3 yards per tote.

Anderson is a vested veteran, but he’ll be subject to waivers now that the trade deadline has passed. With a reasonable $1.75MM cap figure on an expiring deal, it stands to reason that several teams will consider placing a claim on him. If not, he won’t last long as a free agent.