The Jaguars are in the Calais Campbell market, while the Broncos, Buccaneers, and Colts are contenders for fellow free agent defensive lineman Chris Baker, according to Mike Klis of 9NEWS (Twitter link) and Josina Anderson of ESPN.com (on Twitter). Anderson adds that a Redskins return is still in the cards for Baker and he hopes to sign “quick” (link). 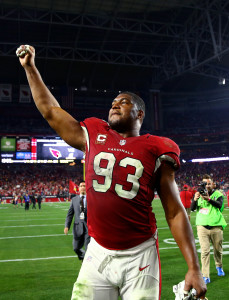 Campbell, the best interior defender on the market in the estimation of PFR, should be in high demand this week, and the Cardinals are expecting to lose him to another club as a result. The Jaguars boast $60MM more in cap space than does Arizona, meaning Jacksonville would likely be able to outbid the Cards and many other suitors. Campbell, fresh off his ninth solid campaign in the desert, would add an All Pro presence to a Jaguars defense that has accrued veteran talent in recent offseasons.

Baker, meanwhile, is expecting an offer from the Redskins, but that doesn’t mean the 29-year-old won’t test free agency. Baker started all 16 games for the first time in his career in 2016, and graded as one of the league’s best interior defenders. The Broncos are expected to target defensive line help after struggling against the run last season, while Baker would give the Buccaneers another talented lineman to pair with Gerald McCoy.