Giants’ Sam Beal Out For Season

Bad news for the Giants. Cornerback Sam Beal, who was chosen in the supplemental draft, is out for the year with a shoulder injury, a source tells Dianna Russini of ESPN.com (on Twitter). The team will place him on injured reserve in the coming days. 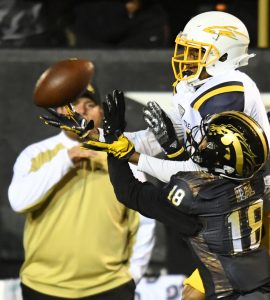 The Giants used a third-round pick in the supplemental draft – thereby sacrificing their third-round choice in the 2019 draft – to add Beal to their roster. It was expected that Beal would help to fortify their cornerback group following the release of Dominique Rodgers-Cromartie. Instead, the Giants are looking thin once again beyond starters Eli Apple and Janoris Jenkins.

Beal’s slender build was one of the primary knocks on him heading into the supplemental draft. After suffering a season-ending shoulder injury just days into his NFL career, it’s likely that Beal will focus on bulking up between now and the 2019 season.

The Giants signed Beal to a standard four-year rookie contract, so he remains under club control through the 2021 season.

6 comments on “Giants’ Sam Beal Out For Season”