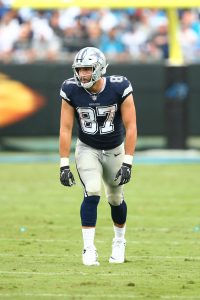 The 2015 seventh-round pick had spent his entire four-year career with Dallas, including a 2018 campaign where he took on a more important role in the Cowboys’ offense. After hauling in nine total receptions through his first three seasons in the NFL, Swaim finished last year with 26 receptions for 242 receiving yards and one touchdown in nine games (nine starts). He broke a bone in his wrist midseason and was placed on the injured reserve in late December.

Swaim had traditionally been touted for his blocking prowess. However, his ability to also contribute in the passing game means he could take on an even bigger role in Jacksonville in 2019. As of right now, the Jags are only rostering two other tight ends in Ben Koyack and Pharoah McKever.