The Broncos are re-signing defensive lineman Zach Kerr, reports Ryan O’Halloran of the Denver Post (on Twitter). It’s a two-year deal, according to the team. 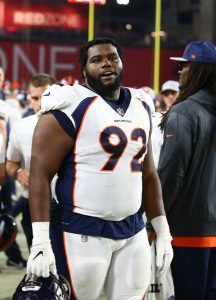 Following three seasons with the Colts, Kerr joined Denver on a two-year deal prior to the 2017 season. The defensive lineman has appeared in 27 games over the past two seasons, including a 16-game campaign in 2018.

Assuming Kerr is indeed returning, the Broncos will presumably continue to hunt for defensive tackles. The team is only rostering one player at the position in Caushaud Lyons.