During what has become a layered process — featuring owners on board with the CBA, owners believing too many concessions are included, NFLPA senior reps voting yes and the other union executive committee members holding out for more — an interesting point emerged. Depending on the structure of the next round of TV contracts, Albert Breer of SI.com notes the cap could rise to nearly $300MM within three years. That would be a staggering increase, compared to the recent run of approximately $10MM-per-year spikes. This year’s cap is projected to come in around $200MM. The prospect of the cap spiking this high so soon would certainly be an incentive for players to green-light this CBA, though many issues remain going into Tuesday’s meeting.

As the NFLPA and the league’s owners prepare to huddle up for a crucial summit in Indianapolis, here is the latest on where the CBA negotiations stand:

NFLPA president Eric Winston is not a fan of the compensatory pick structure that sends teams draft picks for losing talent in free agency and not spending on outside free agents.

“I’ve never understood it,” Winston said (via The Athletic’s Ross Tucker) of a system that began when full-fledged free agency spawned in 1993. “It was negotiated in a long time ago. It’s really antithetical to what we think the NFL should be. We have a soft cap system. There isn’t really the small vs. big market thing like baseball. If everybody is spending about the same money, why is it needed?”

The Eagles’ decision to trade a third-round pick for Golden Tate probably represented the top compensatory pick-related deadline deal, with the Lions taking a 2019 third-rounder and the Eagles likely betting Tate walking in free agency will net them a 2020 third. (Though, the Cardinals acquired a sixth-round pick (and cost the Vikings a 2019 third) by cutting Sam Bradford prior to Week 10.) This system also affects mid- or lower-tier free agents in March and April, when teams’ compensatory picks are attached to signings.

“As a player you are almost better off being cut because then every team can have interest in you without regard to the comp picks. How does that make sense?” Winston said, via Tucker.

The NFL has sent out a memo to teams regarding tampering and trades. Mike Florio of ProFootballTalk.com obtained that memo, noting that it specifically relates to “granting players permission to shop themselves to a new team via trade.” Most importantly, the NFL noted that permission must be obtained from the player’s current team before talks with another organization can take place.

As Florio notes, it’s uncertain if this is just a yearly reminder or if it “arises from a specific incident that has occurred in recent weeks.” If that’s the case, Florio expects the respective team to be disciplined.

Here’s the latest from around the league on the eve of the tampering window.

Eric Winston is back with the Bengals. The team announced that they have signed the offensive tackle. To make room, fellow tackle Jake Fisher has been moved to the NFI/Reserve list, ending his 2017 season. 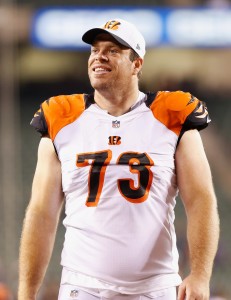 Winston, the president of the NFLPA, was released by the Bengals in early September. The Bengals, at the time, were looking to kickstart a youth movement on the offensive line with the likes of Cedric Ogbuehi and Jake Fisher as the club’s starting tackles with youngsters such as Christian Westerman and J.J. Dielman in support. With needs on the offensive line midway through the season, they’re bringing him back to the fold.

Winston was with the Bengals from the end of the 2014 season all the way through 2016. In total, he appeared in 33 games with six starts.

Meanwhile, the team has yet to disclose Fisher’s illness.

“He’s (dealt with this) as we’ve been going through the season,” head coach Marvin Lewis said recently (via Jay Morrison of the Dayton Daily News). “It’s something that the doctors are monitoring very closely. (Sunday) they thought they needed to pull him from the game and run some tests, so they took him to the hospital to run tests. It’s not as serious as I would think it is, yet, it took him out of the game.”

The NFLPA decided to retain executive director DeMaurice Smith, amending the union’s constitution from holding another election. Smith attained the job in 2009 and won elections in 2012 and 2015. This week’s unanimous vote — one featuring Richard Sherman, Adam Vinatieri, Dolphins long snapper John Denney and free agent center Ryan Wendell as four of the 14 voters — put the kibosh on Cyrus Mehri‘s hopes of challenging Smith in a 2018 election.

“Basically, I’m going to tell player reps, ‘Look, you were robbed of this ability to control your own destiny. You’re only going to get good things from competition. You can have a competition if you stand up and say you want it,’” Mehri said, via Volin. “The players that I talked to loved the ideas that I had. If we can organize the player reps to call for an election, it will happen.”

The co-founder of the Fritz Pollard Alliance that brought the Rooney Rule to the league, the 56-year-old Mehri told Volin the NFLPA didn’t post the new constitution on its website until August. Upon informing Winston at an August dinner about his plans to challenge Smith for the post, the would-be challenger didn’t come away pleased with the response.

Winston said Mehri “didn’t do his homework” about the changes, instead making his pursuit like a public campaign. The NFLPA, per Volin, did not want another “free-for-all” like what occurred in 2015, when Smith fended off eight others vying for the executive director job. This led to the 14-member vote this week.

“At the end of the dinner Eric mentioned to me, ‘Well, they changed the process,’” Mehri told Volin. “They wanted to create the false impression that the election was in the spring. Meanwhile, they were just going to quietly have his contract renewed by some insiders.”

Mehri has already approached player reps about his crusade. Winston said earlier this week having full-on elections every three years would not be a good look for the union. Mehri appears to disagree.

“I started talking to player reps, and a couple of things happened — they uniformly are in favor of competition, uniformly they feel I’m a legitimate candidate, and uniformly none of them remember signing off on changing the constitution,” Mehri said. “Which they must have done, but must have done in such a trickery way that they didn’t know what they were signing on to.

“So I think there’s a scandal buried in this thing, because normally a constitutional change would be in neon lights, very vivid and open.”

NFLPA executive director DeMaurice Smith received a unanimous vote of confidence in being extended earlier this week. Smith’s term will run through at least 2021 and possibly longer. That year looms as a critical year for the NFLPA since the current CBA expires after the 2020 season.

NFLPA president Eric Winston discussed the decision to keep Smith in his current post, rather than open that position up to an outside challenger in March.

“Is that the way Apple does it?” the recently released tackle said of the prospect of a full-scale election process (via Mike Florio of Pro Football Talk). “Does Apple open up for their CEO spot? Does Tim Cook have to run against someone every three years? Does the Commissioner run against someone? Is that how the NFL does business? I think that’s silly.

“I think there’s a time and a place for elections, but again, this isn’t a public office. And that’s sort of what we had three years ago, and guys overwhelmingly rejected that thought. … So I kind of reject the notion that there needs to be a street fight every three years or every four or five years to decide if we have the right guy. I don’t think that necessarily healthy for the union and I don’t think frankly that’s how good companies are run.”

Smith has served in this post since March 2009 and led the way toward hammering out the current CBA on which the league’s operating. He will now have a chance to negotiate the next one and has already proclaimed the ensuing agreement won’t be completed without a “significant” work stoppage.

Cyrus Mehri emerged as a top potential challenger to Smith, but the 14 members of the selection committee did not end up allowing him to make a legitimate push.

“You’d have to ask them,” Winston said of the committee’s decision. “I mean obviously I know he ran as if this was a public campaign and frankly maybe he thought it was for whatever reason, but he didn’t do the homework and understand what the process was and how the process has changed. But obviously he didn’t move the needle with guys and frankly a lot of the things he said we’re going forward with already, so there wasn’t a lot of new criticism and what he said was a lot of what people said three years ago and that was kind of similarly rejected as well three years ago.”

As for if Smith had any role in manipulating the process to make sure it was harder to replace him? Winston shot that down quickly.

“I think it’s a slap in the face when you start talking about that because … I can tell you De Smith has nothing to do with the resolution process,” Winston said. “He’s in the back, he offers his opinion when he’s asked and that’s it. The board, the executive committee, and the guys run the resolution process.