The Army has granted offensive tackle Brett Toth permission to join the Eagles (Twitter link via ESPN.com’s Adam Schefter). Under the previous guidelines, Toth would have been locked into his service requirement. However, he’ll be able to put all of that on hold as he pursues his NFL dream. 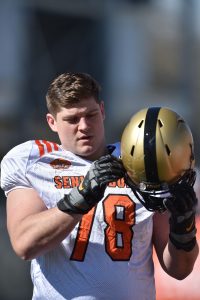 Toth made history as the first player from West Point to play in the Senior Bowl and he’ll look for new watermarks with the Eagles. Toth’s entry into the NFL, along with the recently cleared-to-play Austin Cutting, could boost recruiting for all of the U.S. service academies and open doors for current Army, Navy, and Air Force football players.

Toth played 31 games for the Black Knights and seamlessly transitioned from tight end to an offensive line role.