The Saints are signing Johnson off the Bears’ practice squad, according to NFL.com’s Ian Rapoport (on Twitter). The team expressed interest in Ravens practice squad kicker Jake Verity, per NewOrleans.football’s Nick Underhill, but a Verity injury led the team to go with Johnson (Twitter link).

By rule, Johnson joining the Saints off the Bears’ P-squad will require his new team to carry him on its 53-man roster for at least three games. Parkey is now off New Orleans’ roster, having been placed on IR Monday. Parkey suffered a pulled groin during pregame warmups and struggled attempting to play through the injury.

A Virginia Tech alum, Johnson has not yet kicked in a regular-season NFL game. Johnson succeeded Joey Slye as the Hokies’ kicker, serving in that role with the ACC program from 2018-20. He made 20 0f 26 field goals as a senior. The Bears initially cut Johnson but kept him on their practice squad shortly after cutdown day. Although Wil Lutz is slated to return in the not-too-distant future, Johnson is set for an opportunity in New Orleans.

The Ravens have waived kicker Jake Verity (Twitter link via NFL.com’s Tom Pelissero). Verity probably won’t be out of work for long, given his solid work in the preseason.

Verity, of course, was blocked by Justin Tucker. There are at least a few teams who would probably prefer him to their current options, though the Ravens were unable to turn the UDFA into a future draft choice. On the flipside — interested clubs already knew that there was zero room for Verity on Baltimore’s Week 1 roster. So, instead of giving up a pick, those teams probably decided to wait until today’s deadline.

Defensive end Chris Smith will also be among the Ravens’ cuts today. They’ll have to complete their trimming soon — the 53-man deadline comes at 4pm ET/3pm CT.

The Ravens are discussing trades involving cornerback Shaun Wade and kicker Jake Verity (Twitter link via Jeff Zrebiec of The Athletic). Given the presence of Justin Tucker, Verity was facing long odds of making the team, so it’s not a shock to hear that he could be traded. Wade, on the other hand, is a 2021 fifth-round pick with promise, so it’s surprising to hear that he could be moved. 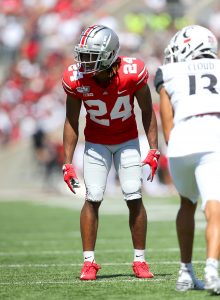 The Ravens might not have much of a choice, given their logjam in the secondary. Wade, an Ohio State product, figures to generate a good amount of interest. He enjoyed three productive seasons with the Buckeyes, including a 2020 campaign where he compiled 34 tackles, two interceptions, and four passes defended. That earned him a long list of accolades, including the Tatum–Woodson Defensive Back of the Year award. He was also a consensus All-American and first-team All-Big Ten selection.

Had he turned pro in 2020, Wade might have been a first-round pick. However, his stock plummeted after he struggled in the national championship game. That’s when Alabama wideout DeVonta Smith went off for 12 catches, 215 yards, and three touchdowns in the first half. Combined with an underwhelming pro day, Wade was passed up by every team until the Ravens snagged him at No. 160 overall.

Verity, meanwhile, is in the midst of a solid preseason behind Tucker. There are at least a few teams who would prefer him to their current options, so the Ravens could turn the UDFA into a future draft choice.