Following the Bears’ one-sided playoff loss to the Saints, Jimmy Graham debated stepping away from football after 11 NFL seasons. Bears decision-makers intervened to convince him to stay. 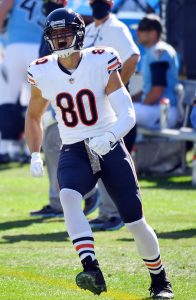 The veteran tight end briefly considered retirement, but Matt Nagy and GM Ryan Pace persuaded him to return, Adam Jahns of The Athletic tweets. Although Graham did not sound like he needed too much convincing to come back, the Bears still have the 34-year-old target in their plans.

Given a two-year deal worth $16MM (to the surprise of many) in March 2020, Graham helped a Bears team that had swung and missed on a few tight ends during the Pace regime. He caught 50 passes for 476 yards and eight touchdowns — his most TDs since 2017. The 6-foot-7 tight end added a score in the Bears’ playoff loss. While Graham is past his prime, he could well help Andy Dalton and Justin Fields as an auxiliary weapon.

The five-time Pro Bowler is due a $6.9MM base salary, and his cap number spikes to $10MM in 2021. Only Zach Ertz, whom the Eagles are expected to jettison, has a higher 2021 cap number ($12.7MM) among tight ends. The Bears also used a second-round pick on Cole Kmet last year. Nevertheless, Graham appears set to stay on as one of Allen Robinson‘s aerial sidekicks this coming season.

It’s fairly common for disgruntled NFL players to give their teams a short list of acceptable trade destinations. However, it’s still quite rare for players to hold contractual veto power over a trade. Currently, there are only nine NFL players with a no-trade clause in their deals, as ESPN.com’s Field Yates tweets:

Watson and Wilson are among the QBs who can block trades. They’re both putting it to use, albeit in different ways. Watson wants out — even after finally meeting with new head coach David Culley – and he’s steering himself towards a small group of teams, including the Dolphins and Panthers. Wilson, meanwhile, says that he doesn’t want to get traded and doesn’t expect to get traded. But, if the Seahawks do shop him, he wouldn’t mind joining up with the Bears, Cowboys, Saints or Raiders. In beating out several other teams for Watt, the Cardinals included the clause in the star defender’s contract.

Jimmy Graham has found a new home, and he’s staying in the NFC North. The tight end is signing a two-year deal with the Bears, a source told Adam Schefter of ESPN.com (Twitter link).

It’s a $16MM pact for Graham, with $9MM of that guaranteed. ESPN’s Field Yates has more details and notes that the deal includes some incentives and a rare no-trade clause (Twitter link).

The Packers cut Graham last week to avoid paying him the final year of the three-year, $30MM deal he signed with Green Bay in 2018. Graham established himself as one of the best offensive weapons in the game during his time with the Saints, having four straight seasons with at least 889 yards from 2011-14. A third-round pick back in 2010, Graham has made five Pro Bowls and two All-Pro teams.

He was traded to the Seahawks for a first-round pick in 2015, and his effectiveness started to dip after that. He had ten touchdowns in 2017 and was still a great redzone threat, but had only 520 yards. He got the big deal from the Packers but was a disappointment, only racking up 447 yards last season.

He’s been a warrior and has managed to play in all 16 games in four straight seasons, but he’s dealt with a seemingly never-ending string of minor injuries that have reduced his effectiveness physically. Now 33, it’s anyone’s guess as to what he’ll look like in 2020. Still, he should be an upgrade for the Bears, who haven’t had anything consistent at the position in years despite multiple attempts to address it. They gave a big contract to Trey Burton last offseason, and while they hope to still see a return on that investment, the deal for Graham suggests that Chicago doesn’t have a ton of confidence in Burton at this point.

The Packers will release Jimmy Graham on Thursday, according to ESPN.com’s Adam Schefter (on Twitter). The release will be formally processed on Thursday, sending the tight end into free agency immediately.

This has been the expected move for some time. Despite Graham’s many career accomplishments, the Packers had little reason to keep him and his $11.6MM cap hit. By dropping Graham, the Packers will save $6MM against $3.6MM in dead money.

Graham was one of the league’s most dominant tight ends for a long stretch. In his first eight seasons – spent with the Saints and Seahawks – Graham earned five Pro Bowl nominations. In 2013, one of his seasons ever, Graham was also named a First-Team All-Pro after notching 86 catches for 1,215 yards and a league-leading 16 touchdowns.

After that, he inked a three-year, $30MM deal with the Packers, but he couldn’t match his previous production. In 2018, he finished out with a 5/636/2 line. Last year, he had just 38 catches for 447 yards and three TDs. It was his lowest output since his rookie season back in 2010, and it was a reminder that Father Time catches up with everyone – even the game’s greats.

While Graham won’t have an issue finding another gig, he’ll be joining a relatively deep free agent class that’s led by Austin Hooper and Hunter Henry. It’s worth noting that fellow veteran Greg Olsen got $5.5MM guaranteed from the Seahawks.

Tight end Jimmy Graham plans to continue playing, but it doesn’t sound like he’ll be back with the Packers in 2020. The Packers plan to move on from him and the final part of his three-year, $30MM deal, according to NFL.com’s Ian Rapoport (on Twitter).

As of this writing, Graham is the league’s highest-paid tight end on a per-year basis. And, as of this writing, he’s set to count for an $11.6MM cap figure. The Packers, in all likelihood, will terminate the deal in order to save $8MM against $3.6MM in dead money. A trade may also be possible, though Graham is well past his best years.

Across ten campaigns with the Saints, Seahawks, and Packers, Graham went to the Pro Bowl five times. In 2013, he was also a First-Team All-Pro as he led the league with 16 touchdown catches.

Last year, Graham stayed healthy – it was his fourth-straight season with 16 games played – but he wasn’t able to play up to his contract. After he registered just 38 catches for 447 yards and three scores, the Packers are ready to move on.

It sounds like Jimmy Graham will suit up in 2020. On Friday, Packers GM Brian Gutekunst said it’s his understanding that the tight end wants to play next year (Twitter link via ESPN.com’s Rob Demovsky).

Graham is under contract with the Packers in 2020 at a $11.6MM cap figure, the final season of his three-year deal. In theory, the Packers could save $8MM by releasing the veteran, with $3.6MM in dead money.

The 33-year-old played in all 16 games in 2019 – marking his fourth straight season with perfect attendance in the regular season – plus the Packers two-game postseason. Graham no longer features as a dominant red zone threat, but he was still productive last year with 38 grabs for 447 yards and three touchdowns. In the Packers’ pair of playoff contests, he caught seven passes for 108 yards, including a (controversial) game-sealing first down against his old friends in Seattle.

In ten seasons with the Saints, Seahawks, and Packers, Graham has earned five Pro Bowl trips, plus a First-Team All-Pro nod in 2013, when he tallied a league-leading 16 touchdown receptions.

Although Jordan Howard matched his career high with nine rushing touchdowns last season, his overall and per-carry yardage numbers continued to decline. The Bears‘ starting running back failed to eclipse 1,000 yards for the first time and averaged 3.7 per tote, as Tarik Cohen gained a bigger foothold in Matt Nagy‘s offense. Howard did not make progress as a receiving back, either, in his third year. The Bears are indeed shopping Howard at the Combine, according to CBS Sports’ Jason La Canfora. One season remains on the former fifth-round pick’s rookie contract.