Defensive lineman P.J. Hall was arrested earlier this week on chargers of assault and interference with public duties, according to ESPN’s Sarah Barshop (via Twitter). 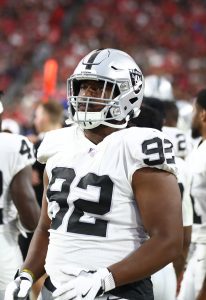 According to court documents (via Barshop), Hall inflicted “bodily injury … by pushing the Complainant with his hand.” Aaron Wilson of the Houston Chronicle tweets that the misdemeanor assault charge was filed back on June 13, and the 26-year-old is currently out on a $1,000 bond. Hall’s next court date is scheduled for mid-July.

Hall was a second-round pick by the Raiders out of Sam Houston State in 2018, but his stint with the organization was short lived. The defensive lineman saw time in 30 games (18 starts) during his two-year stint with the Raiders, collecting 48 tackles, 1.5 sacks, and nine QB hits. He was dumped to the Vikings last August, but after failing his physical, he reverted back to the Raiders roster and was ultimately waived.

Hall eventually caught on with the Texans, where he collected 34 tackles and one sack in 10 games (nine starts). Houston slapped him with a second-round tender following the season, but they later withdrew the offer, making Hall a free agent. Hall would have probably found another gig eventually, but suitors may be wary of a deal as they wait to see if the NFL hands out any punishment under their personal conduct policy.