Despite being in the second half of the NFL season, teams are still actively cleaning up their books in anticipation of upcoming moves or future offseason transactions. We’ve compiled some of the notable financial moves below (plus an interesting note about a future Hall of Fame quarterback):

On the eve of the regular season, the Vikings are locking up a key piece. Minnesota has agreed to an extension with offensive tackle Brian O’Neill, the team announced on Wednesday. 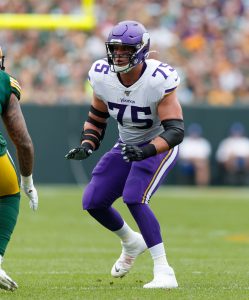 It’s a five-year deal worth a whopping $92.5MM, Adam Schefter of ESPN.com tweets. That’s an average annual value of $18.5MM. He’s still pretty young, so it’s not too surprising to see O’Neill getting top-of-the-market right tackle money. With this new pact, he’s now the second-highest-paid right tackle in the league.

The deal includes $53.4MM in total guarantees and $22.6MM guaranteed at signing, according to NFL.com’s Ian Rapoport (on Twitter). The total guarantees place O’Neill in the top three at right tackle, but the true guarantee does not. Six right tackles are signed to deals that include more than $24MM guaranteed. O’Neill will collect $40MM through the second year of this extension.

O’Neill, a second-round pick back in 2018, had previously been set to enter the final year of his rookie deal and become a free agent at the end of the season. The Pittsburgh product had his best year last season and earned pretty strong marks from Pro Football Focus, grading out as their 24th-best overall tackle.

O’Neill became a starter a little over a month into his rookie season and has held onto his job ever since. He started all 16 games last year and won’t turn 26 until next week.

The team drafted Christian Darrisaw in the first round out of Virginia Tech to start opposite O’Neill on Kirk Cousins‘ blindside. But as Darrisaw continues to struggle to recover from core muscle surgery, it looks like Rashod Hill will be starting the season across from O’Neill.

Harrison Smith recently expressed a desire to stay in Minnesota beyond the duration of his current contract, which expires after this season, but it did not sound at that point like notable extension talks had commenced. However, the sides may be prepared to come together on another agreement.

The Vikings have discussed another extension with Smith, according to SKOR North’s Darren Wolfson, who adds the talks have picked up “significantly” (h/t Sean Borman of VikingsTerritory.com). Given Anthony Harris‘ offseason departure, it would make sense for the Vikings to explore a second Smith extension. He has been one of the NFL’s better safeties for many years.

The 2021 season will be Smith’s 10th, and while the 32-year-old defender saw his five-year run of Pro Bowls cease in 2020, he matched his career high with five interceptions last season. He did so for a Vikings defense that cratered after defections and numerous injuries stripped away veterans. Minnesota let Harris walk to Philadelphia — on merely a one-year, $4MM deal — but signed ex-Dallas starter Xavier Woods and drafted Camryn Bynum in Round 4 this year.

Although another five-year deal is almost certainly not in the cards, Smith has remained a high-end safety into his 30s. Pro Football Focus has rated him as a top-15 player at the position in each year of his current contract. The former first-round pick will be expected to play a key role in elevating the 2021 Minnesota defense, which looks considerably better than last season’s iteration.

Additionally, Wolfson notes the Vikings and Brian O’Neill have begun extension talks. A 2018 second-round pick, O’Neill is going into a contract year. O’Neill has been a critical piece for Minnesota’s offensive line. He enters the 2021 season as that unit’s longest-tenured starter, having been a first-string right tackle in 42 games since his rookie year.

The Vikings seemingly have an open slot for an O’Neill extension, with none of their current starting O-linemen tied to notable veteran contracts. The bulk of Minnesota’s blockers are not yet eligible for extensions, putting O’Neill in an interesting spot. The team has some big-ticket deals for offensive standouts on its payroll, having added Dalvin Cook to this group last year, but also shed the Kyle Rudolph and Stefon Diggs contracts over the past year and change.

The Vikings officially signed second round pick Brian O’Neill, the team announced. The tackle was selected with the No. 62 overall selection.

O’Neill impressed evaluators with his athleticism during the draft process and his long wingspan should help him adjust to the game at the pro level. However, there are some concerns about consistency in his technique.

The Vikings project to start Riley Reiff and Mike Remmers at the tackle spots this year, but O’Neill will look to get in the rotation as a reserve.

The Broncos hosted USC running back Ronald Jones on a pre-draft visit on Thursday, Ian Rapoport of NFL.com tweets. Jones, a likely first or second round pick, is coming off of a Monday visit with the Redskins.

It’s very unlikely that Jones is in play at No. 5 overall, but the Broncos also hold the eighth pick in the second round (No. 40 overall), so Jones could be a consideration there.

Here’s the latest round of NFL Draft news:

The 2018 offensive tackle class is setting up to underwhelm, as Tony Pauline of DraftAnalyst.net observes in his latest look at this year’s prospects. So far, most NFL clubs only rate one tackle — Notre Dame’s Mike McGlinchey — as worthy of a first-round pick, and given that he may be the only available tackle capable of starting on day one, his stock figures to rise even more as draft day approaches. Meanwhile, Orlando Brown (Oklahoma) is viewed as a right tackle, while Connor Williams (Texas) is only on some teams’ guard boards. Further down the list, Western Michigan’s Chukwuma Okorafor, Pittsburgh’s Brian O’Neill, and UCLA’s Kolton Miller are considered Day 2 selections, while Martinas Rankin (Mississippi State) isn’t believed to be a left tackle at the pro level, per Pauline.

Here’s more on the 2018 draft, all courtesy of Pauline: