Jon Condo is calling it a career. The veteran long snapper announced on Twitter that he’s decided to retire. 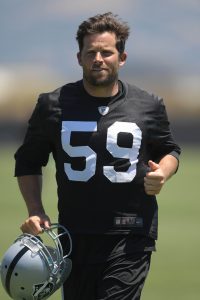 “After serious thought I’ve decided it is time to hang the cleats up. I’m thankful for the opportunity the 49ers gave me but realized after yesterday’s game that I am not 100% committed to playing this game and it would have been unfair to the organization to continue playing.

“I would also like to thank all of the organizations who believed in me throughout my career and gave me the opportunity to compete.

“I’m at the point in my life where my focus has shifted and I realize the most important thing for me is being mentally and physically healthy for my 3 young children and wife.”

The 2005 undrafted free agent out of Maryland ended up putting together a 15-year career that saw him appear in 181 total games. During his career, Condo had stints with the Cowboys, Patriots, Raiders, Falcons, and 49ers. During his tenure in Oakland, Condo earned a pair of Pro Bowl nods.

After appearing in only four games last season, the 38-year-old joined the 49ers last week. The team had initially turned to Colin Holba as they looked to replace the suspended Kyle Nelson, but the team ended up replacing the former sixth-rounder with Condo. The veteran went on to play in Sunday’s win over the Steelers.

Head coach Kyle Shanahan told reporters that he was notified of Condo’s decision this morning. ESPN’s Nick Wagoner tweets that the team is expected to sign a long snapper in the next 24 hours.