Falcons defensive end Adrian Clayborn suffered a torn bicep during Saturday’s Divisional Round win over the Seahawks and will miss the remainder of the postseason, tweets Ian Rapoport of NFL.com. 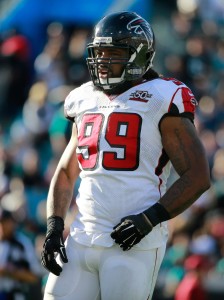 Clayborn already missed roughly a month earlier this season after tearing his MCL and partially tearing his meniscus, so Atlanta has been forced to deal with his absence before. The Falcons play a heavy rotation along their defensive line, but Clayborn — even with several missed games — still played the third-most snaps among Atlanta defenders this season and graded out as roughly average, placing as the No. 56 edge defender among 106 qualifiers, per Pro Football Focus. On the season, Clayborn posted five sacks, one fumble recovery (which resulted in a touchdown), and one pass defensed in seven starts.

Clayborn, 28, has torn his bicep before, as Greg Auman of the Tampa Bay Times tweets that Clayborn missed all but one game in his last season with the Buccaneers (2014) after suffering the same injury. Signed to a two-year contract before the 2015 campaign, Clayborn will count for $5.5MM on the Falcons’ salary cap next season.

One comment on “Falcons DE Adrian Clayborn Done For Playoffs”