James Bradberry is headed to Philly. On Wednesday, the free agent cornerback agreed to a one-year, $10MM with the Eagles, as Ian Rapoport of NFL.com tweets. 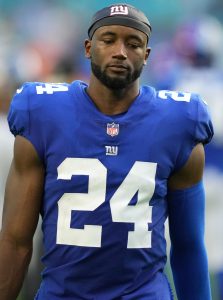 Bradberry, 28, was cut by the G-Men earlier this month. That was pretty much expected, given his would-be cap hit of $21.8MM+ and the other cost-cutting moves that were made by new GM Joe Schoen. The Giants tried to trade him, but ultimately couldn’t find a suitable deal.

“I thought there would be more interest,” Schoen admitted earlier this spring. “There were some teams that showed interest pre-draft, and we had a couple different times [where] there [was] compensation in place and the contract never worked out.”

The former second-round pick was a Pro Bowler in 2020 and has only missed five games across his six-year career. In 2021, his second season with the Giants, he played in all 17 games, tallying 47 tackles, a career-high four interceptions and 17 passes defensed. Clearly, Bradberry still has a lot left in the tank. Now, he’ll get a chance to face his former club twice in 2022 and, perhaps, give them some second thoughts about releasing him.

For what it’s worth, the Giants explored bringing Bradberry back on a cheaper deal. The Texans, Chiefs, and Raiders were also connected to him, but the Eagles ultimately placed the winning bid. Now, Bradberry will team with Darius Slay and Avonte Maddox atop the Birds’ cornerback depth chart.